Meet the Villain of CR Supercars

CR Supercars is a new custom coachbuilder, based out of Yukon, Oklahoma. The supercar company was born out of the established Classic Recreations LLC, a world renowned re-creator of licensed Shelby Mustangs. When CR customers repeatedly asked for design changes, they realized the need for non-Shelby super Mustangs.

2014 saw CR Supercars debut their first model, the “Villain” at SEMA. The Villain is a completely customized classic era Ford Mustang, reborn as the pinnacle of American muscle. CR Supercars promises modern high performance and features, with classic character and charm. ZeroTo60Times recently visited CR Supercars, where the Villain was out front, sunning itself like a waiting alligator.

Shop manager Preston Lindsey showed us around the facilities, and more importantly, the new car. It’s obviously a labor of love for Lindsey, as he points out every custom touch on the bespoke model. Lindsey says they use the 1967 or ‘68 Mustang fastback for the Villain builds, and it looks completely custom, but also familiar to Mustang fans with a sharp eye for details.

“That’s a ’68 GT500 hood customized,” said Lindsey, pointing out the sharp valley running the length of the hood. “We built this front fascia and the grill, honeycomb style, from a ’69.”

The profile shows more custom work, and an absolutely perfect stance. Lindsey points to the aggressive scoops behind the doors.

“The double scoops behind the door on the ’67, we inverted, and put a half scoop over the top. It’s one of those things where you say ‘I’ve seen that before,’ but you can’t figure it out.” The end result looks like something Ford would have done on a high performance model if they had more time and budget.

Around back, another custom element is the tail lights. “We did a ’69 panel, welded it in there, added the ’69 tail lights, shaved them, and added an LED panel.” The rear is nearly flush, almost Ferrari design language. Lindsey points to the rear bumper. “Jason [CS Supercars owner Jason Engel] hates this gap. Even from the factory, they’re uneven with a big gap. So we cut them and make them fit snug. Gives it a nice tight gap.”

Panel gaps are extremely tight, and the bodywork is flawless. The paint is perfection and feels like polished glass. Even the door handles are reminiscent of a brass knuckles type weapon, powder-coated black. When asked about the perfect bodywork, Lindsey surprised us.

“There’s a lot of Bondo on the prototypes [we viewed a prototype], but molds are made of those cars once they are right, that way next time there is much less filler.” This car was adjusted to perfection, then 3D scanned. The molds for production Villains will massively reduce the amount of work needed to create this perfect body. 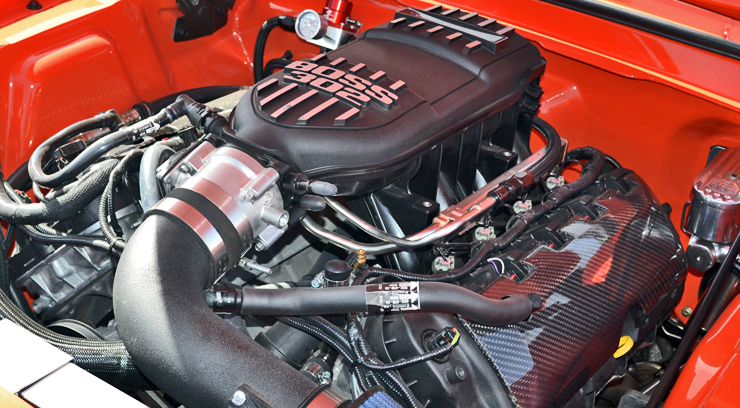 CR Supercars, like Classic Recreations, are understandably proud of their paint and body process. While the painstaking process of hand sanding every piece takes considerable time, customers, and the public at large, can easily see the results. Lindsey told us of a customer that took his car to several shows, placing in nine out of eleven of them, and even claiming the coveted Best of Show trophy. He said it got to the point that fellow car show enthusiasts would look for his Mustang before the show, and leave if they saw the custom ‘stang there. While that was a Classic Recreations car, the same team builds CR Supercars to the same high standards, just with the options boxes blasted wide open.

The interior can also be customized to a buyers whims, but this one looks stellar in subtle black, with sport seats for enthusiastic driving. The cockpit gauges look straight up retro, but also heavily touched, like they’re the originals, but somehow better.

“That’s what I like about this one,” said Lindsey, “is all the subtle differences. They have to ask what you’ve done. They know you did something, but they don’t know what.”

With only the tiniest encouragement needed, Lindsey got in and started the Villain. The Coyote 5.0L V8 roared to life and settled back to a lumpy, angry idle. The long-tube headers and full dual exhaust sounded mean, but livable at idle. He throttled up briefly, and there was thunder and crackling in the small parking lot. From the rear, exhaust sound waves impact nearby pedestrians in staccato blasts. The Villain is controlled enough to be an everyday driver, but when you want to, you can let the monster out of its cage and really be heard.

The overall effect is substantial. The current Ford Mustang GT500 looks like an NFL lineman from the 1980s. Imposing, powerful, but… big. The appropriately named Villain looks like a pro MMA fighter, lean and dangerous, waiting for the right moment to suddenly throw you into the wall.

Viewing the Villain up close, I have no doubt that the price of entry is worth it. While your own Villain will cost you six figures, it will make you wonder why the Nissan GTR gets called “Godzilla,” when there’s a better looking monster from the heartland that is more deserving of the nickname.

Preparing Your Car For ...

Which car do you think has the most controversial styling?