In my previous review of the K40 RL100 portable radar detector I noted how I saved about $1,000 in speeding tickets in the past several years. For the RL100 that was a great value proposition since at the time of the review it retailed for around $400. This time around, I wanted to have the best radar detection and protection setup available. Now I’m still keeping the RL 100 for the wife’s car and for use in rental cars, but for my 2016 Chevrolet Colorado daily driver I wanted the best radar setup on the market. I saw that Escort’s fully integrated models are about as highly acclaimed as K40’s, although as I learned that they are merely front only radar receiver systems as opposed to K40’s separate front and rear radar receivers; my choice became clear. So again I went with K40 Electronics and opted for their top-shelf RL360i model accompanied with three of their Laser Defuser g5 laser jammers (two front and one rear). All in with the radar detector, integrated Expert Control Unit (more on this later), laser jammers, and install from Jackie Cooper Tint & Electronics (in OKC) it came in at around $2,500. I know that’s a hefty sum more than my original portable unit so you’re probably wondering why I would want to shell out over 2 grand more for this upgraded setup. Well, it comes down to the old adage of ‘you get what you pay for’.

For starters, although the RL100 is certainly a quality radar detector as portable ones go, but when contrasted with the advantages of a fully integrated K40 radar & laser protection setup, it now seems to be an inelegant solution.

With an integrated unit you get stealth. It’s common sense that if a cop notices a radar detector on your dash when he pulls you over, then you’re just about guaranteed to get smacked with a ticket as opposed to the possibility of slipping away with a warning.  Now of course K40 offers their “Ticket-Free Guarantee” for the first year in which they pay for any speeding tickets (except in school zones, construction zones, and if DUI).  Let’s say though that it’s past that year period and you haven’t taken advantage of their two year ticket-free extension program.  You’re screwed.  So with the K40 RL360i you never have to worry about that scenario since the system is effectively undetectable to police. 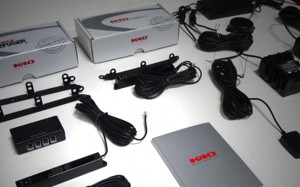 The only place that you may notice anything would be the rear laser defuser mounted on the license plate, but even then you would really have to know what you’re looking at. Also, I plan to hide that better with a black license plate frame mounting along with it. The K40 Expert Control Unit (a optional hard-wired wireless system remote control versus the standard included key fob-like controller) looks surprisingly factory installed in my Chevy Colorado from the color of the plastic to the font type. The installer found a great convenient place to install the Control Unit on a card holder piece. Something I frankly didn’t even notice was there and probably never would have used anyway. Moreover, the installer said that many of their K40 customers rely on their systems so much they want to transfer them to their new vehicles, so installing this in a cheap replaceable part is important. The two warning LED lights were flush mounted under each gauge so they are easily visible when illuminating (especially at night) and nearly indistinguishable when not illuminated.

Another important benefit with the unit being stealthy is that would-be thieves are unaware that your vehicle has this valuable radar system in it. This is definitely something I think about with the portable radar detector. It’s one of those items that is easy for a thief to see in your car and steal, and a relative pain to regularly remove and hide or take with you as you leave your car. So the stealth aspect of the RL360i unit is a major benefit to me in terms of law enforcement or thieves kept unaware as to its existence.

Another major benefit of the upgraded system is better protection. So front and rear detectors along with higher levels of sensitivity grant you with added piece of mind that whatever police threat is out there will be detected well before you reach it. This already happened on the way to the office today in which a section of road that has always been posted at 40 mph was evidently lowered down to 30 mph. I was sort of in a daze while driving, listening to the radio and what not and didn’t notice the new locations of the 30 mph signs. More importantly I wouldn’t have noticed the local cop sneakily positioned in an adjacent field with his radar gun pointed at drivers as they came through this new reduced speed section of road if it wasn’t for the K40 system. The “Beep, Beep, Front K-Band” snapped me out of my daze about a quarter of a mile or so prior to the speed zone change and where the cop was positioned, thus avoiding a likely ticket just a couple days after install. So at least in my case it hasn’t taken long to witness the benefits of the system.

Another thing that the integrated setup offers is the front and rear Laser Defuser g5s that effectively jam police laser guns. Since my truck has a larger profile than say a Mazda MX-5 Miata, and it features some chrome pieces, the installers recommended that we opt for dual Laser Defuser g5s on the front to better ensure full jamming coverage. Then one Laser Defuser g5 in the rear was said to be sufficient coverage for the back half of the vehicle. Knowing modern police laser guns have a very long range and a high degree of accuracy, it was important to pair the integrated radar system with perimeter laser jammers.

Finally, something I touched on in the RL100 review was the pleasant surprise of K40’s customer service. I received quick, knowledgeable and friendly support from K40 when I had a technical question. Then following the registration of the detector, in the course of the next few months I received a couple of follow-up calls from them which simply asked if I was 100% pleased and had any questions. I planned to call them this time around, however the interface and literature is straight forward and intuitive, so haven’t had the need as of yet.

All things considered, I am quite pleased with the K40 RL360i detector system so far. It’s not cheap, but its stealth attributes, OEM looking control panel, powerful radar detection coupled with surround laser defusors gives me peace of mind. Plus, as this truck someday loses its role as my daily driver, then I can always bring it back to Jackie Cooper Tint & Electronics and have them transfer the system to the next vehicle. If you’re thinking about getting a fully integrated hidden car radar detector then I’d recommend taking a look at the K40 RL360i.

Checkout the pictures of the radar detector installation process below.

Which radar detector brand is the best?


Do you think radar detectors should be legal everywhere?

TOP 10 Worst Cars Ever Made