Bloodhound: Zero to Sixty in… One Second?

So now that it is commonplace for road-worthy cars to reach speeds of zero to sixty miles per hour in less than three seconds, the question has to be asked – where does this stop? In the constant quest by performance car manufacturers to make a vehicle that gets to sixty miles per hour a nanosecond faster than their competitors, there is only so long this can go on for.

However, there is already a car that claims to reach 60 mph in a time that is way quicker than any of our roadworthy vehicles. Even faster than a jet fighter, this 800 horsepower V12 monster claims to reach 60mph in just one second… and over 1,000 mph in 40 seconds.

Smashing the speed of sound

This car is called the Bloodhound SSC and it is about to challenge the land-speed record. If successful, the Bloodhound would smash the current world record, an impressive 763.035 mph, reached by Andy Green MBE with the Thrust SSC project twelve years ago. The Thrust SSC smashed past the speed of sound barrier, but Green couldn’t stop there. He teamed up with former record holder, Richard Noble MBE, to start work on the Bloodhound.

The project has encountered many set-backs, largely due to funding problems.  It was due to launch in 2011, but this has had to be pushed back to early 2013.

Faster than a bullet 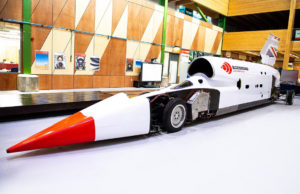 The Bloodhound will also generate power of 50,000 radial G at its rim, due to its 900 mm diameter wheels turning at a speed of over 10,000 rpm. At its maximum velocity, it will withstand air pressure of over 12 tons per square meter on its rock solid carbon fiber bodywork.

The Bloodhound uses a combination of jet, rocket and piston-engined power. It measures a rather long 40 feet (12.8 meters) and weighs in at 6.5 tons. If it achieves its target of 1,000 mph (mach 1.4), it will have achieved the largest increase in the history of land speed record attempts. It will also mean that it is faster than the fastest low altitude speed ever achieved by an aircraft – 994 mph. Following on from this, the Bloodhound will be more advanced than most airplanes and spacecraft.

Perhaps most interesting of all, the Bloodhound car can even outrun a bullet from a standard handgun!

Everything is reliant on top quality engineering work. While most new vehicles have car warranties to fall back on if anything goes wrong, Bloodhound has no such guarantee; if anything goes wrong, it could set the project back many months – or even years until the engineers find an appropriate solution. This is why the project is being treated as an engineering adventure and is being promoted as an educational experience through which to learn about the limits of man power and create a renewed interest in science. The Bloodhound team is working with firms such as Cosworth, which has a solid reputation in performance engineering, to create an education and engagement program. The team has already visited many schools, hosting innovative curricular lessons and have hosted many school visits to its head quarters in Bristol, UK.

Co-founder of the Bloodhound SSC project, Andy Green OBE, said the project was aiming at igniting an interest in engineering among young people:

“I’ve met graduate engineers who are adamant that our previous record was what inspired their career choice as youngsters: that sort of thing makes all the effort worthwhile. Bloodhound SSC will be so much faster and, we hope, will fire up every school kid about the science and technology. We’re going to invite everyone to follow our adventure in this, the most exciting and extreme form of motorsport – the World Land Speed Record. Both as a Mathematician, and as a Royal Air Force fighter pilot, I can’t think of anything better.”

The project is a private venture that is receiving no Government funding. Testing is still underway, and the project is back on schedule to launch in 2013.  Check back for updates on the amazing Bloodhound SSC project.

Who is the best Nascar driver of all-time?

What car sucks the most?