What’s up with speed limits?

In some states (and DC) they are absurdly low, seeming like just another way to give traffic citations and generate revenue for small towns. In other areas, they seem dangerously speedy for the condition of the highway and the volume of traffic. And then there is the real interesting question: why do we even have highway speed limits? Follow along as we try to explain.
Speed limits are simply the maximum, or the minimum, speed a vehicle can legally travel. The limits are set by local municipalities for in-town traffic, and each state sets highway speed limits. Generally, most of the United States has highway speeds between 65 and 75 miles per hour, with a few lower or higher depending on the area. Those numbers come from assessing the road quality, size, grade, and visibility, along with expected weather conditions and traffic flow. The idea is to look at the reasonable safe speed for everyone on the road. Of course, many people speed on a daily basis as their vehicles are capable of much more than the limit, which is why we are even having this discussion. 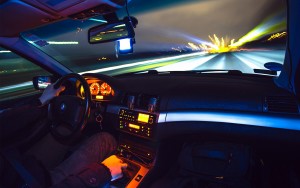 The most obvious initial reason for having highway speed limits is safety. There were 30,057 fatal motor accidents in the US in 2013, according to the Insurance Institute for Highway Safety. In the same report, speed was a factor in 29% of those deaths, or 9,613 fatalities. On a side note, this is a much lower number than fatalities due to a lack of seatbelt use. 55% of people involved a crash that were unbelted died, and 57% of motor vehicle deaths in 2013 occurred in single-vehicle crashes. If safety were the goal, precincts would enforce seatbelt use and rural driving safety versus the statistically much lower killer that is speeding.

Now you’ve probably wondered, how fast would we drive on highways if there were no speed limits? Germany provides a clue, as the average speed of vehicles on the Autobahn, the famous German federal highway system, is about 80 mph. That’s a lazy Sunday morning drive through Denver, but it brings up a good point about driving habits. We typically go with the flow of traffic, so when speed is unrestricted, but traffic is moving reasonably quick, most drivers will join in and travel at a sensible speed. Opinions on why vary, but seem to point to drivers not feeling comfortable for long periods above 85 mph.

Even with the average Autobahn jaunt at an acceptably safe speed, there are of course several powerful cars in Europe, which are well equipped to handle much higher speeds. On a day with good weather, you can expect to see a few vehicles travelling 150 mph or more. And, like any highway system, there are accidents. While the Autobahn kills almost 400 people per year according to German traffic studies, that amount is less than half the amount of people that die from traffic accidents on Germany’s urban streets. Speed is clearly not the only factor in traffic fatalities. Also, according to the Federal Highway Research Institute, Germany’s highway fatality rate is lower than Belgium, Czech Republic, Switzerland, and several other EU countries with restricted speed highways. This can be attributed to a design focused on flow management rather than speed restriction. Germans also do much better than Americans at keeping right when not overtaking or driving slower than other motorists.

For a North American perspective, head to Montana. Until 1974, Montana had no daytime speed limit. Motorists were advised to drive in a “reasonable and prudent manner,” based on weather, road conditions, and their vehicle’s abilities. Accident statistics and info is rather rare from this time period, but the federally mandated 55 mph limit was well documented. For over 20 years, everyone suffered under the low speed limit, until Congress trashed the national limit in 1995.

Montana was once again without a daytime speed limit. While insurance companies warned of skyrocketing deaths, the accident and fatality rates on Montana’s highways actually decreased, according to the Missoulian. Yes, those numbers are backed up by facts. The unlimited speed proved safer than 55 mph, as deaths on Montana’s highway system hit an all-time low. HighwaySafety.com calls it the Montana Paradox. “The desired safety effect from posting speed limits was achieved by removing them.”

So, if highway speed limits aren’t there to keep us safe, why do they exist? The Negative Nancy in me wants to say it is all about money. Our entire highway system is setup so smaller, lower income towns can easily set up speed traps and issue revenue generating traffic tickets. Then the insurance company is okay with the current points system, as it allows those caught in speed traps to pay higher insurance rates for the same coverage, than if the speed trap hadn’t been there. Granted, yes, police forces need to be budgeted for, and traffic tickets do provide a reasonable way to generate revenue without a tax, and sure, asinine driving needs to be reined in. However, safety should be the priority, not making money. In order to have the safer highways, the numbers show we should have unrestricted daytime speed limits. Go write your Congressman.

Which is the best beach ride?

What car sucks the most?