If there has ever been a car hyped to the absolute limit, it’s definitely the Demon. After all, Dodge took the already insane Challenger Hellcat and pumped in even more power. The end result: a quarter mile time that makes National Hot Rod Association (NHRA) go bonkers. Dodge even likes to brag about how the Demon is so good it’s banned.

2018 Dodge Challenger SRT Demon is fast no matter how you look at it. NHRA rates it at 9.65 ET (elapsed time) on the ¼ mile and 140 mph. These numbers give the Demon bragging rights as the fastest production car, ever.

Still, what has this to do with being banned? The truth is, Dodge twisted the words of NHRA to fill the hype train. The car isn’t actually banned from drag racing, and here is why:

First of all, the quarter mile strip has seen faster times than 9.65 seconds from non-production cars. Furthermore, it’s redundant to mention all funny cars and top-fuel dragsters whom rip the finish line under 4 seconds at 300+ mph.

What the PR doesn’t say is this: if you hit less than ET 9.99 seconds and more than 140 mph on the dragstrip, NHRA automatically requires every car to be equipped with a roll cage and present a racing certificate. That’s it.

Obviously, the 2018 Dodge Demon doesn’t (by default) come with a roll cage, as it would render all weigh savings useless. However, there’s a good chance that, even with the extra weight of a safety cage, you may still be able to beat the 10 second barrier. That is thanks to Dodge Demon’s impressive tech stuffed beneath the hood and within the cockpit.

Let’s have a closer look at what gets the 840hp Demon the fastest production car title.

The most powerful production V8

Beneath the hood with a sculpted air scoop rests a 6.2-lit.  You have a V8 unit. It’s the same unit provided on the already powerful Hellcat but with an extra 101hp on pump gas and or 140hp on 100 octane fuel. However, it’s not just the fuel that gives the extra push.

The 2018 Dodge Demon is fitted with a larger 2.7-liter supercharger running at 14.5 psi (11.6 on the Hellcat). The redline has been pushed upwards to 6500 rpm. It only takes 350 milliseconds for the 8-speed automatic to swap to the next gear. While the shift process is anything short of fast, there’s still time for the engine to rev while it happens. It’s the reason why shifting actually starts at 6300rpm but finishes 200rpm later making the most out of the 880hp pouring from the 8 cylinders lead by a race fuel optimized ECU.

Along with the power figure knocking on the door of 900hp, the engine is also capable of delivering a staggering 770 lb-ft of torque. The force is transferred via the gearbox to the rear mounted Nitto 315/40R-18 NT05 drag radials.

The liquid in the Demon’s liquid-to-air intercooler is chilled by the A/C system and enables the intercooler to cool the supercharger’s intake charge. The Demon is probably the first production car that will actually go faster when the A/C is on. You read that right. The A/C is hooked up and accounted for into the actual cooling system allowing the Demon to repeatedly bash the 10 second mark throughout the entire hot summer day.

The massive air scoop placed close to the tip of the hood ensures the most flow of fresh, cold air into the engine. It is also helped by the hollow left headlight which increases induction volume by a considerable 18%.

$1.00 seats and other weight reducing perks

The 2018 Dodge Challenger SRT Demon doesn’t let you bring a friend over to the drag strip – you shall witness the fastest production car on your own. The reason behind this is simple: there’s no passenger seat or rear seat in the Demon. 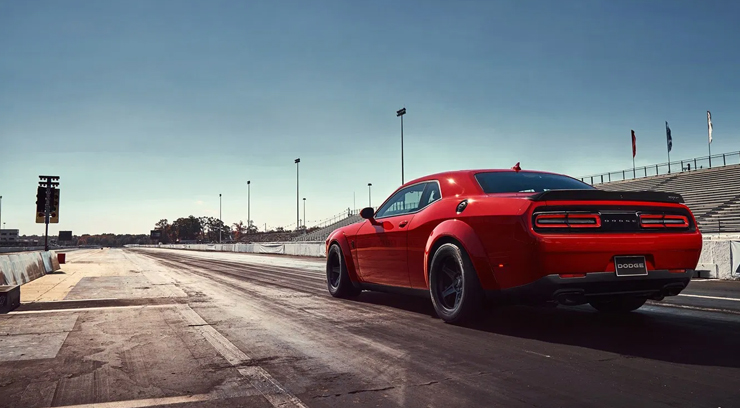 Dodge made the Demon 232 pounds lighter by removing front and rear seats and restraints, got rid of 16 speakers and the spare wheel cover while also cutting insulators and foam. One other major weight impact was the switch to aluminum 4-piston brake calipers acting on two-piece 360mm rotors.

Wishing you wouldn’t feel so alone when driving home from the drag strip? Dodge is offering full seats for just $1 each. It’s no typo, you can actually get Dodge Demon passenger and rear seats for the price of a fancy candy bar.

There’s no respect in the drag world without a proper burnout. 2018 Demon uses the built-in Line Lock system to burn rubber and get tires really sticky. For an amateur, the burnout sequence looks like something out an astronaut’s procedure before liftoff. First of all, you tap the screen to select Line Lock, then severely push the brake pedal to lock the front bicycle wheels while also holding the button on the steering wheel.

Increase pressure on the brake pedal and allow the torque to heat up the rear Nitto rubbers until smoke starts to infiltrate in the cockpit although the windows are fully closed. After a whole 10 seconds of rubber shredding, it’s time to ease into the staging area. Inside the car, you’ve just tasted the wrath of the Demon – it’s only next that you are about to witness its full rage.

Pulling both shift pedals activates the Trans Brake. You start revving the engine while keeping foot on the brake pedal. Raging metal on metal sounds find their way from beneath the hood while other waves travel through the exhaust.

Release the first paddle shifter. The wheels don’t turn but the car urges to leap forward with every part. Releasing the second paddle shifter launches the car on the black strip while the hollow sway bars and adaptive shocks transfer as much weight as possible to the rear wheels.

Press the gas pedal to boost the flow of power but restrain it enough not to break traction and slip like on a banana peel. Chances are, unless you’re a pro, you won’t get it right the first time; or the second. The Demon is no car for amateurs; reaching the 2.3 second 0-60 mph and 9.65s ET requires ideal weather and track conditions but also a skilled set of hands and feet behind the wheel.

At the end of the day…

While everyone is packing their rides on the tow platform and reach for parked pickups to head home, your facial muscles are still tensed from all the adrenaline induced smiling. Thankfully, you don’t have to deal with another steering wheel to get home.

Remove the open-head lug nuts and take out the directional tires. Push in a wider pair, tighten to speck and be ready to stroll along the exit lines and towards the highway. No need for loading and unloading, no need for a second car. At the end of the day, that’s where the beauty of a road legal, warranty covered drag car rests.

A Look at the Batmobiles

Which Hypercar is the Best?

Do you change your own oil?