Being in full control of a very powerful car is just like eating whatever you please and never getting fat – it doesn’t really happen. You know a car has a lot to offer when upon pressing the throttle, it makes you question your ability to manage the output. .  The 2019 Chevrolet Corvette ZR1 encapsulates an amazing amount of power.

The previous generation of the ZR1 ‘Vette packed a punch, but the new ZR1 has taken it to the next level.  We are talking about one of the most powerful front-engine cars in the world right now – a nightmare inducing beast that can shame some half-a-million-dollar supercars.

On a sad note, this is probably the last variant of a front-engine Corvette we are ever going to see.  And while a mid-engine C8 is lurking not very far in the future, it’s refreshing to know that there are 28 combinations of the seventh generation Corvette (C7).  For now though, the ZR1 is the king of the ‘Vettes.

If there’s one thing that gives the reputation of the Corvette C7 ZR1, it’s the engine.  The LT5 unit features 8 cylinders placed in a V-configuration, pushing out twice as much as the 1990 C4 and about 120hp more than the previous C6 ZR1.  The engine is designed using the LT4 (Camaro ZL1) as inspiration.  The LT5 brings on a 6.2-liter displacement and a huge 95mm throttle body.

Fuel is fed through a direct-inject system and combined with air sucked in by an Eaton supercharger.  The forced induction unit is 52% bigger compared to the one on the LT4 engine and takes about 110hp in order to generate 13.96psi when the C7 ZR1 reaches the redline.  To account for the increased capacity of the supercharger, Chevrolet mounted a bigger intercooler and also integrated a whopping 13 radiators throughout the engine bay.

All this tech translates to 755hp and 715 lb-ft of torque ready to transfer to the wheels.

Thanks to the halo hood, the 2019 Chevrolet C7 ZR1 is able to boost airflow by 41% in comparison with the Z06.  It is encouraging to know that even when subject to heavy stress such as running consecutive ¼ mile passes or quite a few hot laps, there was no power loss nor any other kind of mechanical issue generated by overheating

This pure American engine is available with an optional 8-speed automatic gearbox with Track mode system.  For an extra $1,725 over the base price of the ZR1, you get to use the Performance Traction Management (PTM) program.  Floor the brake, then the throttle and wait as the rev counter goes to about 1,400 rpm.

Take the foot of the brake and the ZR1 will blast off with the tiniest amount of wheelspin.  With a bit of practice, you can come across to 0 to 60 mph times in the low 3 second range while passing the quarter mile mark in the low 11’s.  The best part about the ZR1 is that you can consistently keep up these results – they’re not just happening once in a while.

Standard transmission aficionados will want to opt for the standard 7-speed manual gearbox with Active Rev-matching.  While the automatic gearbox shifts faster (thanks to the locked torque converter and prediction algorithm), we’ll be the first to admit that there’s no substitute for to thrashing through gears on your own. 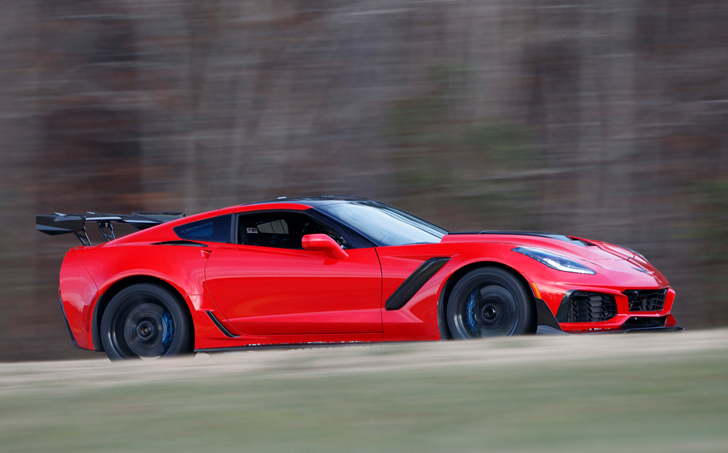 Although GM boasts a 2.9-second 0-60 mph time, owners may struggle to duplicate that result in real life tests without perfect conditions.

The added grip of the ZTK system is complimented by a stiffer suspension tuning, and, according to GM, 60% more downforce thanks to a flat belly, an adjustable high-placed rear wing and a front splitter flanked by endplates.  Chevrolet states that at 212mph (which is the top speed of the ZR1), the aerodynamic package can push the car against the road with a staggering 950 lbs. of force.

The ZTK Track Performance package will ask for an extra $2,995 out of your pocket should you choose to fit it.

Made for real race tracks

When it comes to testing the 2019 Chevrolet Corvette C7 ZR1, there’s one big lesson to be learned: there’s no way to reveal even half the potential of this car in a parking lot while running around cones.  The ZR1 is definitely built to attack real race tracks with long and wide straights, gut-wrenching hairpins and grippy tarmac.

The sheer amount of power that the ZR1 can push into the ground is literally impossible to control unless you’re having a run on a proper race track..  So, how does the car behave on actual track? Here’s a short overview.

The ZR1 can sustain up to 1.11g of lateral acceleration when going into skidpad areas.  The tail slightly walks on the 3rd gear in an almost pre-programmed manner.  With just a bit on steering wheel input to correct in, you can then plant down on the throttle and hold on in awe as the 755 American horses and 715 lb-ft of torque dig into the asphalt.

Braking at the last moment seems to be the implicit way to drive the 2019 C7 ZR1 around any track.  The amount of stopping power provided by the 6-piston front and rear Brembo calipers biting into 15. 5” and 15. 3” inch ceramic rotors is comparable to a competition car.  Braking torque is strong enough to make it feel like everything around you keeps going.  Thankfully, the optional bucket seats will ensure you stay in one place, providing high lateral support.  NASA should think about abandoning their High-G Training Centrifuge and just take their astronauts out on the track in a ZR1 ZTK.

As mentioned earlier, the temperature readings show how much Chevrolet engineers worked on enhancing cooling.  After a few consecutive hot laps, the readings stabilized at roughly 220 for water and just under 275 degrees for oil.  While these are still in the higher range of what temperatures should look like, the values are incomparably better than on the older Z06.  Furthermore, the improved cooling comes at no downside: there is virtually no power cutting or brake fading in order to compensate the increased amounts of heat coming out of the C7 ZR1.

Does it behave itself on the road? Yes

When you take the 2019 Corvette ZR1 on the road, the reactions you get are over-the-top, and for good reason.  The car is beyond simply aesthetically pleasing.  It’s an eyeball magnet. Drawing your eyes – whether it’s in a city intersection or a supercar meet.

When not equipped with the ZTK performance package, the C7 ZR1 will behave itself on the road.  Overall driving is relatively smooth and won’t get you tired while heading home.  The ZTK package adds a bit of harshness in the mix.  However, it’s not something out of the ordinary, but rather demonstrating similar behavior to Porsche 911’s RS GT2 and GT3 trims.

At $131,300 packed with the 8-speed automatic and ZTK “High Wing” package, the 2019 Chevrolet Corvette ZR1 comes a whole lot cheaper than the cars it contests. It is the fastest production Corvette out there (so far), and since Chevrolet engineers are working on the mid-engine C8, it will probably remain in history as the fastest front-engine Corvette that has ever been – what a great farewell this is.

Which transmission setup do you prefer to drive with?

Your rich uncle dies and leaves you one of his cars that you must keep for life. You choose?