The Corvette C8 is Mid-Engine Masterpiece

Since 1953, Corvettes that have made it into production have been two things: Front engine-rear wheel drive, and relatively affordable. Since 1959, designers and engineers in the young program have flirted with the idea of sticking the motor behind the driver. Many design studies, from Chevrolet Experimental Research Vehicles (CERV), to open wheel racer development vehicles, the ‘Vette has had a “bastard child” relationship of sorts with the MR drivetrain. Now that the DNA results are in, and Chevrolet is no longer denying the true spirit of its first born sports car, a veil has been removed and the C8 seems to be the most honest and immoderate rendition of the longest living sports car ever made.

On the evening of July 18, 2019 from inside an aircraft hangar in Orange County, California, GM held a live streamed press event to reveal the next generation of its acclaimed sports car… On the morning of July 19, 2018 every manufacturer with a performance division held conference calls and short notice meetings to figure out how to react to the inevitable tidal wave that will follow the earthquake from the night before. History lesson aside, the C8 represents the inception of the next generation of production performance vehicles, and those that cannot keep up with the curve face annihilation.

With a base price of $59,995 for the 1LT, the popular argument skeptics of a MR ‘Vette held onto, that “there’s no way it will be affordable” was proven to be unfounded. With a MSRP increase of less than $5k over the current generation Corvette, and a claimed sub 3 second 0-60 sprint that better aligns its performance with the $80k+ 2019 Z06, Corvette has redefined what it means to be a budget supercar. Let’s take a look at the traditional competition being the Porsche 911. For 2019 the base MSRP for the legendary Porsche is $97,400, so $37,405 more than the 1LT. Besides the addition of a back seat and admission to the 911 fraternity, that 37k gets you: a deficit of 116 horses, a second later to 60, and a top speed of 182mph versus the 194 that the Vette claims.

The new Corvette is the only way to get to 60 on four wheels in 3 seconds for under $60k, this level of performance is far beyond where base Corvettes were at the turn of the century. Tadge Juechter, chief engineer for Corvette, cited the FR layout had reached a performance ceiling and the only way to ensure improvement over the last generation was to put more weight over the rear axles. Making such a drastic change while maintaining the spirit of the Corvette was quite the task; increased passenger compartment space, storage space for the proverbial set of golf clubs, and even some groceries allowed the C8 to hold on to the claim of being a practical sports car. Combine the interior space with the tried and tested Chevy small block capable of a projected fuel economy of 18 city/ 25 highway, and you have a daily driver.

The two previous Corvette generations have had Z06/ZR-1 models that granted the brand supercar performance for a premium. The C8 brings supercar like numbers while in base trim, a standard never before set by the Kentucky built grand tourer. It would take an absolute fortune to buy any factory competition to the ‘Vette: Ferrari 488GTB ($262,647), Lamborghini Huracan EVO ($261,274), McLaren 600LT ($240,000), the list is shocking when paired with the fact that none of the listed are any more than two tenths faster to 60 than the $60,000 Chevy. The performance and functional styling Chevrolet put into this new Corvette, affords twice the base MSRP GM is asking. Bringing a competitive car to production at a curiously low price has high end performance manufacturers on notice for possibly the first time at the hands of a high volume nameplate. 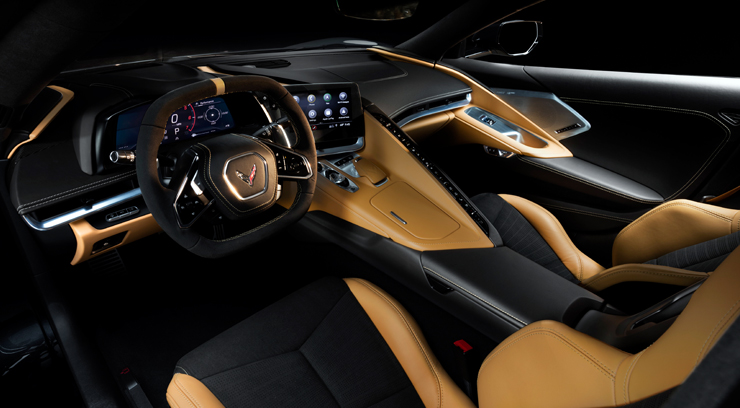 The appeal of a mid-engine car is ingrained in our culture as the ultimate form of sports car. Once preserved for those with the most disposable of incomes, the C8 allows middle class shoppers that have “made it” to pilot a precision designed, performance machine with the power plant situated aft the cockpit.

The line that divides a sports car from a supercar is defined albeit highly contested. There have been models like the Viper, Nissan GT-R, and Porsche 911 that have sparked debates on whether they met the qualification to carry the title of supercar. One name that has frequently placed the aforementioned track legends on the lower podium steps has been Corvette. Interestingly the Corvette virtually has had unanimous consent in being classified as a sports car. Construction of the C8 includes the best materials and technology the industry has to offer, including carbon fiber, and high pressure die cast aluminum to form the structure. Moving the drivers’ position forward enhances visibility and sensation while steering in and out of curves thanks to being located directly over the vehicle center of gravity. So combine the mid-engine design, with quality materials, and a power plant that is massively efficient, the C8 makes a strong case to be considered a supercar.

In the end, what makes a supercar “super”? The C8 has a BHP just 5 shy of one qualification in my opinion; 500 horsepower sounds more super than 495 though there is no way anyone could tell the difference. There is a notable lack of active aero; a new favorite amongst the particular supercar customer base. Like it or not, coming from a manufacturer that makes fleet vehicles unfairly affects the reputation of the Corvette when comparing it to exclusive makes the likes of McLaren, Ferrari, and others. All of these points though petty and arguably irrelevant (The legitimacy of some vehicles active aero effectiveness has been disputed, and there are anticipated higher performance trims that may integrate more high end features), are the types of barriers the ‘Vette has faced before. The argument the C8 brings to the debate is “money talks”, and with the line that separates it from Italian exotic manufactures so blurred, it may be time to give the Corvette its due.

Chevrolet Performance has: through a recession and subsequent lifesaving government bailout, continued to make dramatic improvements to a car that impresses the critics and breaks the hearts of its rivals generation after generation. Since the return of the “Blue Devil C6 ZR-1, six-figure exotics have had a fight on their hands. When performance had reached a point where it had appeared a plateau was imminent, such a drastic change was made that a shockwave rattled the entire automotive industry leaving auto writers, enthusiasts, and manufacturers to revisit the question: “How much car can you get for a dollar?” The C8 has changed the game in a way we have yet to understand, and it’s no question of whether it bears fruit, rather how sweet it will be to have a new more affordable, faster, sexier benchmark for a performance car.

What cars would you buy ...

Which Vehicle Do You Think is the Most Intimidating to others?

How do you feel about Tesla’s sales approach?

Tesla should be allowed to offer a direct-to-consumer sales (Tesla owned car dealerships)
The U.S. government should force Tesla to use the industry standard car dealer franchise model