Jaguar has a mixed history, creating some of the most beautiful cars on earth, and some of the most dreadful badge-engineered also-rans. For every gorgeous classic XK120 or charismatic E-Type, there’s an equal number of the poor quality XJ40 or dreadful X-Type models. For a prestige automaker first entering the fray of two hotly contested market segments, every single step has to be calculated to perfection. Here’s how Jaguar Cars plans to do it.

Launched early 2016, the “Art of Performance Tour” is an interactive experience touring several cities in the United States to acquaint the buying public with the new compact XE and F-PACE crossover SUV. Potential customers can reserve a date and time on the Jaguar USA website, and rather than a test drive and a high pressure sales pitch, get an experience worth sharing. This is a costly way to advertise, but incredibly personal, smart, and effective. And Jaguar doesn’t have much choice, as its go big or go home in these segments.

“It’s huge news because these are new segments for Jaguar,” Kim McCullough, Vice President of Marketing for Jaguar Land Rover, said in a press release. “They’re very important growing segments for us, so it’s a chance to expand on the owner family for Jaguar. We expect for sales starting the fiscal year in April, probably 95% of buyers will be new to the Jaguar brand.”

That’s a huge amount of new customers (and a potential ton of money coming in), if word gets around that the new Jags are better than the competition. After experiencing them firsthand, I think they are.

I attended the Art of Performance Tour in Dallas, thinking it would be a long infomercial, with a bit of good Jag info thrown in. I was wrong. Upon entering The Bomb Factory convention center that had been snazzily made over by Jaguar stylists, we were greeted by the entire model lineup, which is a full range of vehicles for the first time in Jaguar’s history. Staff weren’t even in the room, so we were free to go in-depth on our examinations of the new XE and F-PACE, looking under-hood and poking into every crevice.

Clearly standing apart from the rest of the cars, the F-PACE is Jaguar’s first SUV ever, and for their first time out, they nailed it. The F-PACE is one of the very few attractive SUVs at any price point, and it carries the marquee’s reputation for sporting drive. Think of it as a tall and quick sport sedan with real-world carrying capacity for your family. Paraphrasing Jag’s sales pitch form the ‘50s, it has “the grace, space, and pace” to get the job done.

“When you look at each vehicle, you absolutely get that Jaguar DNA,” said McCullough. “Ian McCallum, our head designer, does an amazing job. And that is a challenge, when you design an SUV but try to keep the sporting characteristics of a Jaguar.”

Driving a pre-production F-PACE home, McCullough noticed how many people were looking her way. “It’s not often that an SUV attracts attention, like the F-PACE was doing, just from the customer experience I was having last night driving it home. You could tell people were absolutely noticing it.” McCullough noted that Jaguar does not expect F-PACE sales to cut into Land Rover’s SUV sales, as completely different customers were interested in the distinctively different SUVs.

Starting around $40,000, if the F-PACE performs as well as it looks, it will be a massive sales success. Speaking of performance, while we didn’t get to drive the Jag SUV, we did get to thrash the XE on the track. 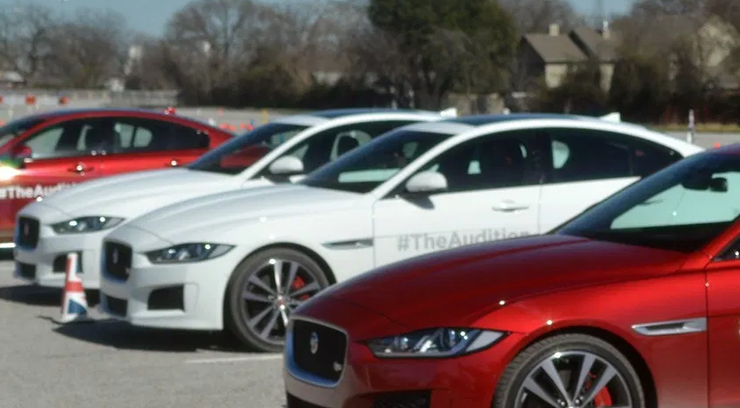 The XE is immediately visually notable as a BMW 3-Series competitor. Similar size and shape, with an aggressive sportiness, the XE screams character and performance, but at an approachable price point. Starting at $34,000, the XE is the most affordable Jag in the lineup, but they didn’t skimp on the performance. We drove the supercharged V6 trim, which howled under heavy throttle, sounding very similar to the F-TYPE’s legendary V8. 340 horsepower was more than enough for the 3,500 lb sedan in downtown Dallas traffic.

The steering is sharp and responsive, light but providing feedback; better than the current 3-Series. The handling is there too, staying flat through even hairpin corners. Switch the suspension to sport mode, and things get even stiffer and performance oriented. There is a real difference here in settings, and surprisingly, sport mode might be too much for everyday driving. On track though, it was excellent, giving high confidence. The XE is communicative, allowing the driver to understand exactly what is happening, even at the limit.

Hammering the throttle too early on a high speed corner, we finally broke the rear tires loose and the tail started to slide around. It was linear, predictable and fun, and provided a clear mental picture of how to get it all back in line. Our co-driver, a retired Le Mans race driver, was checking Facebook during our laps, even when the tires were screaming.

“At the end of the day, the Art of Performance Tour is about fun,” McCullough said. “It’s about performance, and this is about enjoying this revitalized brand.”

It’s not all fun and games though, as the XE can be ordered with serious complementary incentives if you move quickly.

“We are giving away free navigation systems valued at $500, and then a credit of up to $800 for your first month’s payment on lease or loan through Jaguar Financial Group. So there’s some real tangible benefits for folks to sign up early and be the first to be able to drive one home and show off to your neighbors.”

“I love that a Jaguar stands out,” said Beatty, a Human Resources Manager in the long term care industry. “Besides being a fabulous car, you don’t see Jaguars everywhere you go. I wanted a car that didn’t look like all the neighbors’ cars, because I’ve never been nor wanted to be a follower.”

That says a lot about the brand and the buyers. Jaguar is not BMW or Mercedes, nor should they be. Besides the nationality differences, there is an entirely different ethos to their design philosophies. English prestige feels different than other European brands, and a whole lot of buyers are about to find that out with the new XE and F-PACE. They’re not British versions of German luxury cars; they’re Jaguars.

Which brand of motor oil do you prefer?

Which is the best car name?