Jeep Gladiator Review – Are You Not Entertained?!

Enter the 2020 Jeep Gladiator before a cheering crowd. Cue Russell Crowe screaming “Is this not why you are here?!”

Er, sorry, we’ll lay off the Gladiator quotes (a bit). Jeep pretty much prints money these days, which is good news for the rest of Fiat Chrysler Automobiles (FCA).  After winners like the Chrysler 200 and Dodge Dart, the Fiat 500L that no one bought, and Alfa Romeos that break down on journalist test drives, all FCA needs is Elon Musk to handle their Twitter account to round out the dumpster fire.  Fortunately, things at Jeep seem like they’re run by Steve Jobs-era Apple, with one money making hit after another. Following the success of the Wrangler JL, the Jeep Gladiator takes the logical next step after the 4-door Wrangler Unlimited, and brought back the Jeep pickup truck after a nearly 30 year absence.  FCA hopes “What we do echoes in eternity,” but we’ll need a closer look to see if this Jeep is built to last.

You’d think the Gladiator would just be a Wrangler with a small cargo bed welded on the rear, but it’s more complicated and capable than that. FCA stretched the wheelbase by nearly 20 inches, adding an overall 31 inches over the already-not-small Wrangler. This makes for a long appearing truck, but it’s not a bad look. Jeep dumped a bunch of heritage pieces on the Gladiator, from the grille to the tail lights, so it looks authentically Jeep from any angle.  You can easily take roof off, in traditional Jeep fashion, cheezily called “going topless.”  The front and rear doors are designed to be removed too, although if you’re like my redneck neighbors, you can do that with a janky old Silverado. An ultra-cool touch is the tilt-forward windshield for your slow, open air, off-road adventuring.  With an impressive 11.1 inches of ground clearance and big knobby tires, this Jeep looks more American than an overweight bald eagle taking out a huge student loan.

Based on its looks, you might expect a version of Dodge’s 5.7L Hemi under the Gladiator’s retro hood, but as of this writing, you’re only going to find cylinders.  It’s been a long time since you could get a 4.0L badge on the fenders, and honestly, that’s okay. While the old straight six was bulletproof, its real benefit was you could fix it with a hammer, a beer can, and some electrical tape.  The Pentastar 3.6L V6 is in everything in FCA’s portfolio, from minivans and Challengers to the last worthless Avenger, and it goes under the hood of the Gladiator too.  Here it offers 285 hp and 260 lb-ft, which is far more than the old 4.0L. “At the signal, unleash hell,” or at least it’ll do a mid-7 second sprint to 60.  That’s slower than most mid-size trucks, but at least the gas mileage is excellent.  Nah, that last part’s a lie, but no one in the history of the internet has Googled “Gladiator gas mileage,” so we’ll move on.

Jeep’s previous truck, the Comanche, had an interior that looked like it came off the Dollar Menu.  Fortunately for us, the Gladiator does without all the plastic rectangles in favor of modern/retro cool, like an upscale version of the Renegade.  You can option the interior with the same color accents as the exterior, which is a nice look in red.  The center of the dash is dominated by a typical infotainment screen, this time looking like it’s protected by a chunky Otterbox case.  The screen is bright, high-res, and responsive, and modern UConnect with voice commands should be a frustration-free experience.  The seats can be optioned with leather, stitching and embossing, and heating.  There’s also a heated steering wheel, dual-zone climate control, keyless entry, and a removable waterproof Bluetooth speaker that will blast your crappy dubstep at the campsite.  That’s a lot of “Cool Jeep, bro!” in one package, and it shows at a Tesla-like 4,800 lbs.

All of that costs some coin too.  The Sport trim, with cloth interior and no heated bits, starts a little over $33,500, but you’ll never find one of these on the lot. Sport S is a little more realistic at $36,745, while Overland starts at $40,395. Rubicon adds fancy off-road tech like Fox shocks and an electronically disconnecting sway bar, and a hefty $43,545 price tag.  Launch Edition rounds out the top trim and will cost you an eye-watering $62,310.  All of those numbers are before massive dealer markups, which is a Jeep thing I still don’t understand.

Some prospective Jeep Gladiator buyers with the coin to consider the top trim, may be lured by the upcoming Tesla Cybertruck.  For roughly a 10% premium over the top-end Gladiator, the Tri-Motor Cybertruck’s claimed capabilities are hard to ignore, such as 0-60 in under 2.9 seconds, towing capability of over 14,000 lbs and armored glass claimed to be unbreakable even bulletproof to small arms fire. 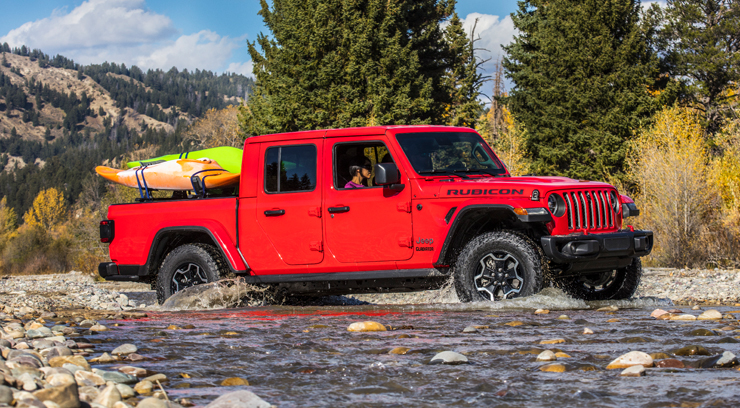 So, Does It Off-Road?

Sure, it can, but it’s not the greatest thing ever. That’s understandable, as the Gladiator is sold to real people that need a livable, daily drivable vehicle. With a short front overhang, multiple skid plates, and 30” of water fording ability, Gladiator is more off-road capable than most mid- or full-size trucks.  But, with a 10” longer wheelbase than a Wrangler, and nearly 3 feet longer overall, the Gladiator gets high-centered and scrapes along off-road trails where a Wrangler or Tacoma can glide through.  This isn’t a huge issue, and one that’s easily solved by a few common suspension upgrades.

Alright, So It’s a Great Truck?

The Gladiator is a good truck overall, but gets beat by others in its class, for less money.  The towing and cargo bed capacity are class-leading, but the driving dynamics are class-trailing, making for a mixed experience. Car and Driver placed Gladiator third, after the Colorado and Ridgeline, and beating only the Ranger.  That’s not great when Honda’s car-truck beats down a brand new truck.  With old-school recirculating ball steering, solid front axles, and a choppy riding suspension, Gladiator just isn’t fun on the streets.

Who Buys a Gladiator?

The newest Jeep seems to appeal to three main buyers:

The real question is: does the Gladiator’s cool factor push it past equally capable, and often cheaper competitors?  The aging Colorado and not-quite-right Ranger are one thing, but the new Ford Bronco and Bronco truck look to be serious contenders with an equal amount of retro cool attitude and capability.  One thing is for sure here, the mid-size truck class is a lot better than it was 10 years ago, and the Gladiator is a new welcome addition to the party.

Best alternative for families that refuse to drive minivans?