The Z06 has always been a performance bargain, delivering an affordable package that enables a lowly Chevy to compete with much more expensive supercars. While the performance has been impressive, it’s always been looked at from a value perspective. Reviewers praise the performance for the price, then pick the Euro car in comparison tests. In 2015, Chevy decided to put an end to that nonsense. We recently met up with Xtreme Xperience to test drive their Z06 on track.

The seventh generation Corvette was all-new for 2014, with a direct-injected LT1 V8 making 460 hp, backed up by solid transmission choices, excellent handling, and a surprisingly decent interior. Nice, but the base model seems to be more for the midlife crisis crowd. While the base Corvette competes against similarly priced cars like the Porsche Cayman, the Z06 is a sharp stick in the eye of every performance car under a quarter million dollars. The Z removes the Members Only jacket in favor of a Kevlar vest.

Under the long and heavily contoured hood is a 6.2L LT4 V8 based on the base car’s LT1. Learning lessons from the previous generation supercharged ZR1, the new Z06 also sports a 1.7L Eaton supercharger. Besting the older ZR1 (and for much less money) the Z06 is GM’s most powerful production engine ever made, making 650 horsepower and an even more impressive 650 lb/ft of torque. It may be an ancient OHV design, but GM stuffed the LT4 with tech. Direct injection, variable valve timing, and Active Fuel Management combine to achieve 22 mpg. That doesn’t sound like a ton, but it’s 40% better than the massively more expensive Lexus LFA, which is down nearly 100 hp. THIS is why people keep mentioning value with the Corvette. Just based on the numbers, it’s a steal.

The transmission choices are as impressive as the engine. The manual is a 7-speed with a crazy looking pattern on the shift knob. Gone are the rock-crushing (but durable) T56s, in favor of a manual that would feel at home in any six-figure car from Germany. The auto is impressive too, something you don’t hear a lot from the performance car segment. For the performance figures, you would think it’s a dual clutch, but the Z has a traditional auto, although with eight forward gears.

The Z06 starts right at $80,000, which is a good chunk of coin for a Chevy, but also a serious performance bargain. That price, after options, puts it right in line with the Dodge Viper, which the Z06 has repeatedly defeated in magazine comparison tests. The handling comes from the Z’s co-development with the C7R racecar. An emphasis on lightness necessitates extensive carbon fiber bodywork, resulting in a Corvette lighter than the previous ZR1. There’s the ‘vette standard MagneRide suspension, 15.5” carbon ceramic brakes, and expensive and sticky tires, Michelin Pilot Sport P285/30ZR19s up front and 335/25ZR20 out back.

All of this racecar stuff makes the Z an impressive as a drag racer too. Most magazines put it at 11.2 seconds in the quarter mile, which is seriously impressive. GM claims the 8-speed can do 0 to 60 in 2.95 seconds, with a 10.95 sec quarter. Think about that for a second. This is a completely factory stock Chevy, running tens. We live in a crazy world.

When we initially approached XX’s Z06, what immediately struck us is how good it looks. Chevy did their homework here. In-person, it is very low and wide, like an ALMS spec racer disguised as a street car. The fender arches are reminiscent of the C2, and multiple vents are far bolder than any other previous Corvette in memory, like it knows it is okay to advertise, when you can back it up. The black accents add emphasis, rather than looking like afterthoughts (like Buick fender vents). The roof is startlingly low. The quad pipes out back are unusually large. The black spoiler stands out, as the ‘vette is usually wingless. Even the door handles are an intriguing flat design. 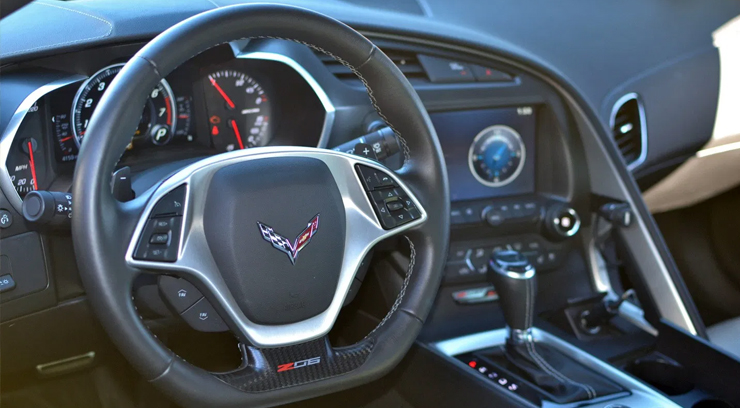 Upon opening the door, we were greeted by the best Corvette interior since… well, ever. The C4 and C5 were plastic monstrosities at least 10 years behind their competition. The C7 remedies that. Carbon fiber is everywhere, with tight fit and finish. The rest of the interior is coated in a nice feeling leather, with a thoughtful layout. The seats look great and fit snug, providing plenty of bolstering, something Corvette has usually lacked. It is initially a bit of an adjustment to get used to the dash and center console, canted severely towards the driver, but while it’s a bit distracting at first, overall the ergonomics and design work. Some passengers won’t like the feel of everything focused on the drive, but who cares? Leave those people at home.

Startup leaves an impression, as this car sounds mean compared to previous ‘vettes. Our thoughts were it sounds more like some high compression beast at an NHRA event than a production car. Settling back to idle, it’s just plain nasty. A chunky burble like you would expect from an aftermarket cam. A very quick rev, and the LT4 announces potential. It oddly sounds like the best of American and Italian V8s combined. Not bad at all.

Performance is a measure of extremes. Just getting ready for the run, easy on the throttle to the exit ramp, the ‘vette makes pleasing noises, but seems docile enough to drive every day. Step on it, and let it rev to anything above 3,000 rpm, and things change in a hurry.

Power delivery is crazy, there are no other words for it. The torque is so massive, and from so early on, that the various traction systems have to coordinate to keep it all together and on the track. It feels as if the lightning fast computers are not entirely up to the task of reigning in this much power. Still, it works, and it goes. Our test driver said acceleration was scary fast, with power delivery felt quicker than many other supercars he’s tested. Every stab of the throttle produced crushing surges of g-forces, with an overwhelming sensory barrage from the roaring exhaust out back, the whir of the blower up front, and our rattle brain politely suggesting we slow down.

The brakes are incredibly strong, creating g-forces similar to acceleration, and highly resistant to fade. The MagneRide suspension is smart, and you can almost feel it working, thinking and adapting on the fly. It knows exactly what stupid thing you want to do, and lets you attempt it without killing yourself. It makes you just confident enough to have fun at high speed, but is slightly unhinged, reminding you of the danger. It’s a great drive.

Returning to the pit area, we reluctantly handed the car back to Xtreme Xperience. We found the Corvette Z06 able to win over even non-‘vette guys. Forgetting the price, the looks are eye catching, the interior is solid for the class, and it is perfectly capable as a daily driver to weekend track weapon. The Corvette has touched and competed with the supercar realm a few times in the recent past, but this time is different. This is not a sports car. The Corvette Z06 is a genuine supercar.

Should elderly people be required to reapply for their driver’s license?

Yes, after a certain age
No, never
Yes, but only if they have had an accident

Which Hypercar is the Best?