2018 Kia Stinger GT Review: Performance To Back Up The Looks

Stepping Up To The Stinger

If you told me Kia would make a car capable of competing with the German and Japanese offerings a decade ago, I would have laughed. Although Korean cars were never truly bad, they were never good either. Simply put, manufacturers like Hyundai and Kia designed and built simple and affordable economy cars for the masses. They were inexpensive for a reason. The build quality was just not there, the designs were nothing special and the materials were appallingly cheapo.

The early 2000’s marked a new era for the Korean manufacturer however. Kia stopped focusing on simply making an inexpensive car and started placing more emphasis on the quality. In Europe, the Kia Cee’d caught on and was broadly accepted as a great mid-size hatchback.

In 2010, the third-generation Optima launched and really showcased what Kia is capable of. It cemented them as a company which can at least keep up with competitors. Now though, the company is doing something remarkable. They’re not just going head-to-head with the Germans and the Japanese, but are in fact beating them at their own game. And they’re doing so with this: the 2018 Kia Stinger.

Kia’s latest endeavor has a striking name: the Stinger. It’s squarely aimed at cars like the A5 Sportback and the 4-Series Gran Coupe, but it occupies an entire segment above those cars. Thanks to its long wheelbase and spacious cabin, it’s in fact more similar to the Lexus GS or even the Infiniti Q50. Kia has positioned the Stinger in its own unique little niche segment, and that alone makes it special.

Then we get to the looks, and perhaps the Kia’s stronger side. If the Stinger didn’t have a Kia badge on it, you can bet that 9 out of 10 people would not be able to tell the manufacturer who made it. It’s so innovative, new and striking, that no one would even suspect it was designed and built by the Korean manufacturer. Kia still carries a poor brand perception with a chunk of the general population, but the Stinger is a car that can be a catalyst to change minds, and quickly.

Most of us expected the Stinger to be a slightly modified Optima or Cadenza, but that preposition fell as soon as we laid eyes on it. I guess the best compliment you can give it is that it doesn’t look like a Kia at all. It doesn’t even look like something made in Germany either. It’s got this long body with elegant and sweeping curves. Kia fitted the Stinger with an aggressive fascia, their trademark Tigernose grill and a pair of gorgeous double LED headlights.

The roofline swoops into a single downward motion starting from the middle of the car, running all the way back to the small decklid. The taillights are connected via a thin brake light, which matches the overall design well. The Stinger GT, the most powerful, flagship model, boasts quad exhausts at the rear. They’re true quad exhausts as well. Companies like Lexus and Mercedes have been known to resort to fake plastic exhaust tips with the real ones hidden underneath. Not so with the Stinger. What you see is what you get. It’s not just a great effort for their first sporty sedan, but a great effort overall.

As mentioned earlier, Kia’s downfall was build quality, especially in the interior. Luckily, they’ve addressed that issue and the cabin is now more than a match for that gorgeous exterior. The first impressions when stepping inside are positive. The words which immediately spring to mind are luxury and quality. The design of the dashboard isn’t particularly exciting, but it’s no longer bland or boring to look at. The Stinger features three circular HVAC vents in the middle like you do in a Merc, as well as a large infotainment screen at the top.

The seats are wonderfully comfortable, with plenty of space both in the front and the rear. Models equipped with the Napa leather feel as expensive as any other BMW or Benz in this segment. You have to remind yourself that you’re in a Kia because what you’re experiencing doesn’t make any sense. The badge on the steering wheel feels like a mismatch for the quality in every direction. My biggest surprise was just how spacious the rear seats are. People as tall as 6’4” can fit comfortably without cocking their head, which is not something A5 Sportback passengers can attest.

The thing is filled with the latest safety and driver assistive technologies, as it should be. There’s even an advanced HUD system which is height adjustable and shows you all of the necessary information on the windshield. This includes speed, navigation, cruise control, blind-spot detection, etc. Kia has done a truly remarkable job with the Stinger. It’s relatively easy to create a car which can compete with established rivals design-wise, but more impressive to make the cabin feel just as competitive. 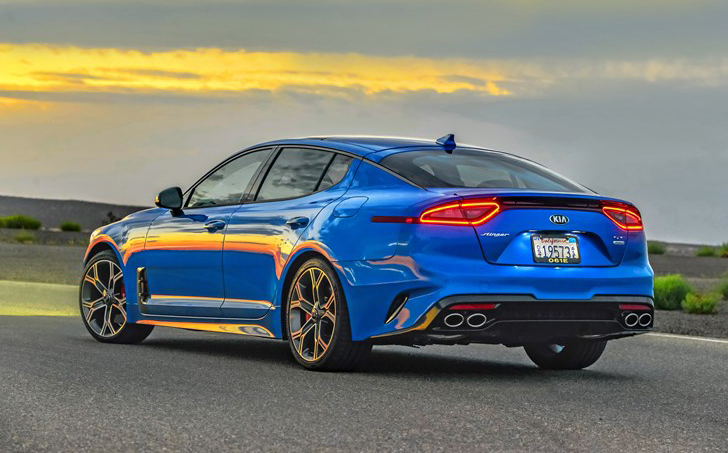 Performance To Back Up The Looks

So far we’ve covered the exterior and the interior, and concluded they’re both brilliant. Now, you may be thinking that it looks good inside and out, but it’ll be a disappointment to drive. If you thought that, you couldn’t be any further from the truth.

Even the base models get a 2.0-liter turbocharged four-cylinder with 255 horsepower and 260 lb-ft of torque, but the flagship GT is the enthusiast’s choice. The 3.3-liter twin-turbo V6 in the GT makes a remarkable 365 horsepower and 376 lb-ft of torque at just 1,300 rpm. Compare those figures to the established German rivals, and you’ll find they’re typically higher with the exception of M and AMG variants.

The official figures mess with your mind at first. The sprint to 60 mph takes only 4.7 seconds and flat out you’ll be travelling at 167 mph (electronically limited). Seeing as how most of its competitors are limited to just 155 mph, the Kia gets full bonus points for that. Not that you’ll be travelling anywhere near 150 mph anytime soon, so let’s just call that bragging rights.

The Stinger is offered in RWD and AWD variants, both of which utilize a silky-smooth eight-speed automatic transmission with paddle shifters. Unfortunately there is no manual option, despite the fact that it’s a sporty sedan. Statistics show that very few people go for a manual transmission in a large sedan however, so it’s no wonder Kia didn’t even bother to develop a manual really. The eight-speed auto is lightning-quick, even on the downshifts, so I can’t complain about that.

The best part is that Kia has really worked on the suspension and chassis in an effort to make it a true driver’s car. The weight is down low, bringing the center of gravity down with it, and RWD models even get a limited-slip differential. Yes, it will drift (in GT trim), in case you were wondering. This is a sizable, luxurious, RWD sedan manufactured by Kia and will effortlessly drift at a moment’s notice. What has the world come to?

Should You Buy a Stinger?

Absolutely. I never thought I’d recommend a Kia over a BMW or an Audi. It doesn’t have anything to do with the price either. The Stinger GT is simply a remarkably sporty sedan with its priorities in check. It looks as good if not better than its competitors, the cabin is more than a match, and it actually outperforms all of its intended rivals. Now all we need is a hotter version of the Stinger, perhaps a rival for the M4 and the RS5. Kia, are you listening?

What is the Most Expensive Car?

Which Redneck Motorsport is the Redneckiest?