On 30 September 1955, en route to Paso Robles, on his way to compete in the Salinas Road Race in California, James Byron Dean was killed when his custom 1955 Silver Porsche 550 Spyder collided head-on with a 1950 Ford Tudor coupe. He was 24 years old. Even though he made only three films in his short career (two would be released posthumously), James Dean had already cemented his reputation as an American icon and legend. Through his film roles, love of fast cars and his own mysterious persona, Dean introduced a new breed of anti-hero to an America searching for its identity in the Atomic Age.

With his edgy magnetism, vulnerability and self-effacing humor, James Dean was the first to give a voice to the frustrated kids of post-WWII America. He was Rock ‘n Roll before there was Rock ‘n Roll (the car radios in Rebel Without a Cause played the soon-to-be outdated Big Band Jazz). Before Kerouac’s novel On the Road and Elvis’s swinging hips busted a generation out of “jail” — James Dean cracked the ceiling first.  Unlike his contemporary Marlon Brando, who looked like he might kick sand in your face and steal your girlfriend if he had the chance, James Dean was an entirely different breed of “cool.” He was a former ugly-duckling made good, and gave the impression that he would look out for you if he could because your problems were the same as his. 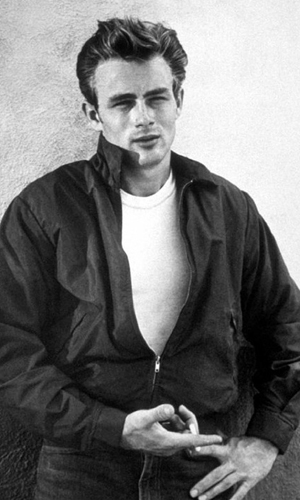 Dean’s film roles in East of Eden (1955), Rebel Without a Cause (1955), and Giant (1956) championed the plights of underdogs everywhere. He proved that you can make it out of anything and get the girl too if you just keep your head above water and never give up when times are tough. Dean didn’t start fights in his films but he finished them if he had to. Knock him down and he’d get back up. He was a sensitive tough-guy for a new age. Poet turned Folk Singer turned Rocker Bob Dylan idolized James Dean as a kid growing up in the Midwest. In Don McLean’s 1971 anthem “American Pie,” which chronicles the youth movement from the ‘50s through the 1969 tragedy of Altamont Speedway, Dylan is described as the “jester” who “borrows” a coat “from James Dean.” Dean taught the introverted, awkward Robert Zimmerman how to be cool and how to believe in himself. Robert would soon start calling himself “Bob Dylan” and begin a music career. Dean also gave Dylan and other youths of the ‘50s a love of fast cars and motorcycles.

James Dean loved cars (Porsches especially) and helped bring hotrods to the forefront of American Popular Culture. After striking it big in his first film role in 1954, Dean purchased a 1955 Triumph Tiger T110, a 650 cc motorcycle and a red 1953 MG TD sports car. A year later, Dean traded one sports car for another when he acquired a 1955 Porsche Super Speedster. He also upgraded the Tiger by trading for a 1955 Triumph TR5 Trophy. For a formerly shy bespectacled, gangly kid from Indiana, it was a dream come true.  He had finally grown into his skin and announced his new look on film and on the roadways. Dean had a tumultuous upbringing. He lost his mother when he was 9 years old and had a distant relationship with his father. It seemed that his new mode of transportation was helping him at last out-race the demons of the past.

However, Dean’s films were the main vehicle for solidifying his legend as both a car enthusiast and as an anti-hero for the disillusioned youth who made up his audience. In his first film role as Cal Trask in director Elia Kazan’s 1955 adaptation of John Steinbeck’s novel East of Eden, Dean showcased his talent for the new performance art known as “method acting.” Dean played the introverted, unloved second son in Steinbeck’s re-telling of Cain and Abel.  The character of Cal was the role that most resembled Dean’s in real life. Dean was allowed to improvise both his movements and lines. The most famous scene involves Dean’s Cal desperately trying to win the approval of his strict father only to be turned away once again.

The scene resonated with Dean’s audience and was symbolic of the strained relationship he shared with his own father. Since the film takes place in 1917, the only car shown is a World War I era Ford Model T. The scene shows a salesman instructing the Trask family how to operate the complicated new invention. Dean in the film is literally present at the birth of the automobile itself.

East of Eden was the only film released while Dean was alive, but Rebel Without a Cause is the film that made him a legend.  While perhaps not as successful in its storytelling as ‘Eden,’ ‘Rebel’ offers a true showcase for Dean’s range as an actor.  Dean plays Jim Stark, a troubled teen who is a good guy at heart but just can’t stay out of trouble. The film was the first of its kind to attempt to show teenagers in a more realistic light and recognize them as their own distinct demographic.  Co-starring with Dean is the beautiful Natalie Wood and the young Sal Mineo as the tragic “Plato.” Mineo represents the shunned outcasts of society. In the film, Plato is almost a ghost, an untouchable.  But Dean befriends Mineo’s character nevertheless and tries his best to shelter him from the impending “death of the universe” promised at the beginning of the film.  Jim’s sensitive treatment of Plato struck a chord with Dean’s young audience (including the teenage Bob Dylan), and assured them that Dean had their backs. No matter how cool he was on the outside, James Dean was an underdog like them and he looked out for the outcasts.

‘Rebel’ also showcases knife fights, romance and Dean’s love of cars. The most iconic scene involves a life-and-death game of “chicken” where Dean, decked out in a crimson jacket, races a black 1946 Ford Super De Luxe against a 1941 Chevrolet. The scene has influenced every car race in film since

Throughout the film Dean drives a classic black 1949 Mercury Coupe, a status symbol that’s a target for the local tuffs and also a method of romancing Natalie Wood (even though she refuses a ride at their first meeting).  James Dean had solidified himself as a “rebel” — a rebel on wheels.

Dean’s next and final film was the sprawling Giant, which starred Rock Hudson and Elizabeth Taylor. Dean played the supporting role of ranch hand Jett Rink.  Giant tells the story of Texas itself by focusing on 30 years in the lives of wealthy ranch family the Benedicts.  Just as ‘Rebel’ had been innovative in its portrayal of teenagers, Giant was also ahead of its time with its frank discussions of racism, class warfare and gender roles. Dean’s character was once again an unloved, outsider but unlike his other films, this time the 24-year-old Dean wasn’t forced to play a teenager. The immensely wealthy Jordy Benedict, played by Hudson, tries everything in his power to prevent Jett from achieving success, but the realization of the American Dream will not be denied.

Dean drives a 1927 Roadster Pickup that signifies his economic status early in the film while the Benedicts drive a 1955 Duesenberg J. Jett Rink represents all the hardworking dreamers looking for their chance at a better life, however, Jett shows us that success carries its own burdens. At the end of the film, Dean is a man in his mid-fifties with gray hair and receding hairline. Dean himself would never reach his 25th birthday. 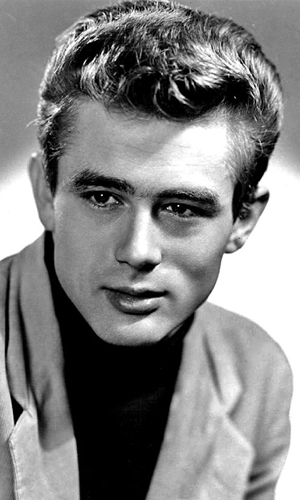 It was around the time of Giant that Dean purchased the 1955 Silver Porsche 550 Spyder to compete in the Salinas Road Race. He had it customized with a 130 racing number and gave it a “Little Bastard” badge, referencing Dean’s own nickname given to him by Hollywood stuntman and friend Bill Hickman. When Dean showed the car to his friend and actor Alec Guinness, Guinness called the car “sinister” and told Dean never to drive it.  The Spyder could reach 150 mph and was built to burn hell — a rebel even among racing cars.  Salinas would be the first chance Dean would have to race the Spyder. Dean had raced his old Speedster before in the Palm Springs, Bakersfield and Santa Barbara Road Races. In his first two races, Dean finished in first place in the novice competition, and 2nd and 3rd respectively in the main events. In Santa Barbara he idled in 18th place and screeched into 4th before blowing a piston never finishing what he started. Dean hoped Salinas would bring better results, even though the movie studios had now banned him from racing.

On the way to Salinas, Dean drove the Spyder because his Porsche mechanic Rolf Wütherich recommended that it needed more “breaking-in” before the race. Bill Hickman followed behind in Dean’s 1955 Ford Country Squire station wagon and trailer.  Accompanying Hickman was photographer Sanford H. Roth who was doing a story on Dean for Collier’s Magazine.  Earlier in the afternoon Dean had been cited a ticket for speeding 65 in a 55 mph zone. To avoid the small-town speed traps of Bakersfield, they decided to take a short-cut on Route 166/33, which would take them to CA Route 466. They now traveled West on Route 466 to meet fellow racers for dinner in Paso Robles 60 miles away. Dean, with Wütherich in the passenger seat, tore ahead of the station wagon, passing several cars along Polonio Pass and Antelope Grade. At 5:45 p.m. PST, a speeding black-and-white 1950 Ford Tudor coupe driving East swerved onto Route 41 in the opposite direction, crossing the center line. Dean driving at 85 mph attempted a “side stepping” maneuver used by professional racers to avoid the head-on collision, but there was no time or space. The Spyder flipped up into the air and into a ditch. Wütherich and Dean were taken away in the same ambulance. Wütherich suffered a broken jaw, but Dean took the full brunt of the crash.

James Dean was the first of the new youth counter-culture to die before his time. Others would follow. Bright souls filled with life and talent that were gone too soon: Buddy Holly, Ritchie Valens, Elvis, Marilyn Monroe, Eddie Cochran, Natalie Wood, Sal Mineo, John Lennon and many others. Even Dean fan Bob Dylan nearly shared his idol’s fate when he broke his neck in a horrific motorcycle accident in 1966.  In the years since his death, James Dean has spawned countless imitators but there will only ever be one James Dean. The place of his death remains a shrine as is the place of his birth. Today, his likeness can be found on every piece of merchandise imaginable.

High-Tech Roads of the Future

Which was your favorite car-related toy growing up?