Since the 215 Grand Nationals produced in 1982 to commemorate the success of reigning NASCAR Grand National series champion Darrell Waltrip, Buick made refinements to its last RWD body on frame coupe from an era that was rapidly fading into history. Beginning life as a naturally aspirated V6 that dripped 125 horses from the crank, the special project managed to improve its performance and appeal year after year. The last call was made and 1987 would be the end of the Grand National due to the incoming GM-W platform and decades of front wheel drive LEGENDS by General Motors. In a sort of last stand for Buicks performance identity, the greater minds gathered in an office and declared the final GN was going to be an experiment to push the limits of the car in every way and billed it the Grand National Experimental- GNX.

547 Grand Nationals bathed in black were allocated to be subject to the experimental treatment, and to minimize any disruption from the main office nerds, these cars were shipped to Livonia, Michigan firm ASC McLaren. When you have the choice to sublet the modification of your sinister, treasonous, halo car killing machine, who better than the same builder that had the Formula 1 championship for the past 3 years??? The team at McLaren had the high task of boosting the performance, handling, and sex appeal of the final edition Grand National in every way possible. To complete a project this in depth it would take GM no less than five years, so McLaren did it in one. By now the GN had gained a turbo-intercooler setup and 245hp with 355lb-ft of torque, so naturally that’s where McLaren started. A larger ceramic impeller Garrett T3 turbo, higher performance intercooler provided 16psi of boost, and that’s just the beginning of the build sheet.

When ASC McLaren returned the GNX to Buick it had 55 more horses for 300hp and 420 serious lb-ft of twist. ASC McLaren made sure if they were going to touch this car, it was going to be as legendary as the company’s namesake. Additional power adders were ported heads for increased flow efficiency, and a dual exhaust opened up to match. Handling was addressed by upsizing the wheels to 16” and V rated tires to 245/255 front/rear, stiffer springs, shock absorbers, and sway bars complemented the increased body rigidity. The unsung crown jewel of the GNX is its unique and special made rear differential longitudinal torque bar and lateral panhard rod configuration. The purpose of this heavily engineered setup was to place over a ton of force exactly where you want it, exactly when you want it there: over the rear wheels, upon hard acceleration. This assembly alone is deserving of an article, but to avoid making this an engineering lesson, understand that it also served to eliminate chassis flex, wheel hop, lateral stability, and torque splitting on full throttle acceleration. Only available with a 4 speed automatic, an oil cooler, specialty torque converter, and reprogram were the only modifications to the 200-4R transmission. Stewart Warner gauges gave the interior a flat out no nonsense look that served the driver with independent speedometer, tachometer, oil pressure, coolant temp, and boost gauges. Passenger side dash is graced with a GNX serial number plaque because is a vehicle limited production if it doesn’t have a production number plaque? Original owners also received a commemorative jacket that found their way to thrift stores, or were hand-me-downed into oblivion, making mint condition examples today fetch upwards of $4000.

Subtle yet bold exterior treatments were all installed to serve legitimate purposes; those upsized wheels and tires were made possible by enlarging the wheel openings and finishing them with some sleek flairs that were executed better than the Bushwackers taped to the SRT vehicles of today (Fight me). Both fenders featured large functional vents that served to expel that turbo engine bay heat. Less functional but still welcome touches include fender and hood badge deletes, supplemented by grille and trunk lid “GNX” badges just bold enough to ward off any 5.0 mustang lurking the streets for a fight… 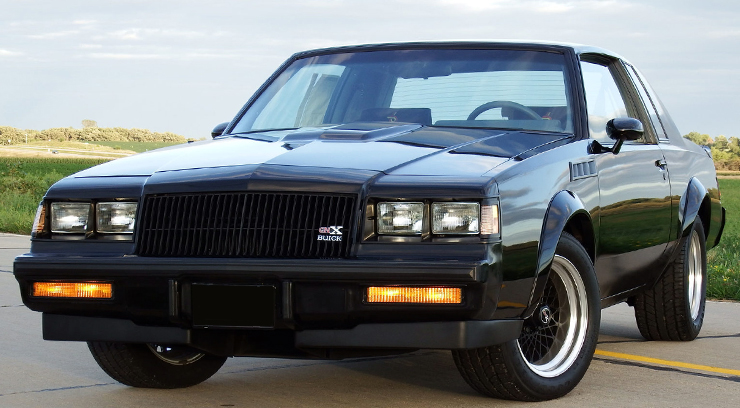 Should you find yourself challenged to a duel of the high octane variety, the GNX was packing enough heat to ensure you would be the “último hombre” at your local Friday night drags… Though it had improvements to the suspension and handling, the focus of the GNX was good ol’ American straight line performance. Car and Driver managed to leap to 60 in 4.7 seconds, which is quick by today’s standards so imagine in the anemic 80s. The quarter mile took 13.5 seconds to complete, though other press sources were able to allegedly achieve a 12.7 pass, but rumor has it that boost may or may not have been tweaked a little by Buick engineers to impress the media test pilots. Truth be told, even if it was tampered with, such performance from changes so simple are still deserving of applause. The GNX was America’s fastest car for 1987 and one of the fastest in the world, competing with names such as the Ferrari F40, and making the Corvette look just bad. Twin Turbo performance house tuned Callaway Corvettes couldn’t even keep up with the phantom muscle car.

You would need plenty of chips to land a brand new GNX as it was a $10,995 option over the list price of $18,295 for a fully loaded Grand Nasty. Many dealers didn’t even put theirs up for sale, and dealer markups pushed sales prices as high as $75,000! This would be a tragedy if the car wasn’t marketed as a come and get it while you can collector from day one, but with just over 500 built, it’s good to know not too many were chopped up, or hauled to the scrap yard like many of the legendary muscle cars that came before. An ‘87 GNX recently sold at a collector auction for $165,000 and the turbo Buick continues to see growing interest. I will never understand why GM canned the turbo six with the rear wheel drive Buick, but for the years that followed this sinister piece of Americana, Buick had and continues to suffer from a lack of spirit; oozing through the years like a sort of zombie slug dropping little zombie slug-mobiles in its wake. I do not wish to see the death of Buick (this writer still mourns the passing of Oldsmobile), but the time to act is NOW! Where are the bold engineers and project managers that are willing to put their career on the line for a bold pet project that they know will be loved by millions?

The 1987 Buick Grand National Experimental was a cosmic event in the American car market universe. The star that shined so bright through the 50s and 60s had gone dim through the 70s and 80s, ultimately ending up with a singularity: The GNX. The black hole of the American Muscle car ripped any other remnants of the era into atoms and in its wake left a deep, dark void. The modern muscle car era is only similar in name, with a few of the familiar names returning but just like any 50 year reunion, it’s just not a party when most of the names we reminisce about the good ol’ days with are not in attendance. For a brief moment in history a link connecting the past to the future was the only V6 muscle car there ever was. For anyone that assumed the GNX was anything less than a top tier muscle car, they were quickly educated by the linear tail lamps of the Darth Regal.

Tour of an Expensive Car ...

Which former official pace car is the best?