The other day, we had a chance to look closely at the 2019 Lincoln Navigator.  It is one of the largest – if not biggest – full-sized SUVs on the road. Yes, the GMC Yukon and the Chevy Suburban and Ford Expedition are big SUVs, but the Navigator-L still stands out at the top of the ladder.  There are two members of the Navigator family, the standard and the L, which stands for, as you might have guessed, the L(ong) version.

The Navigator-L Is Dramatically Different In Size

Imagine getting into a Navigator-L — after having driven the standard-sized model — it is somewhat jarring. Suddenly, you must be aware of the added length when you are doing such mundane chores as parking at the local supermarket; pulling up beside the gas pump at your favorite station, or just changing lanes on the local Interstate.

This is the time you notice just how much such driving aids as a 360-degree camera and a 180-degree camera mean more safety. And, other devices, such as blind-spot monitoring; lane-change warning, and the like, add to your driving experience and safety.

The Navigator is built using body-on-frame construction. Its ride is very untruck-like. Navigators use independent four-link rear suspensions, instead of solid rear axles and springs. This means that instead of hitting a bump or rut and punishing the folks inside, the suspension steps over the problem, keeping the driver and passengers quite comfortable. 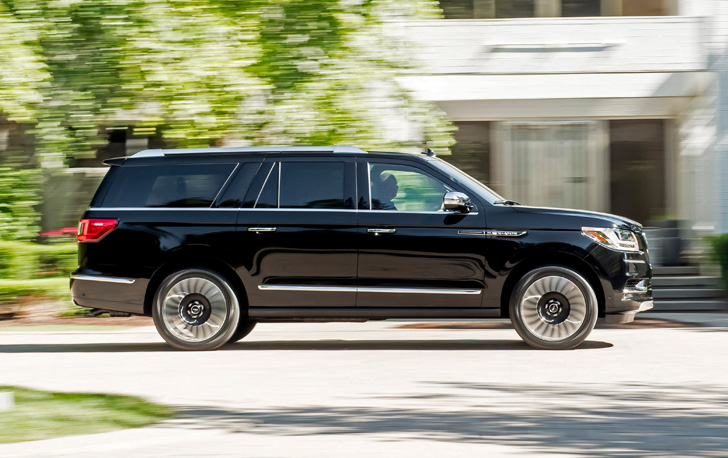 The Navigator-L Handles Well For A Big Vehicle

Moving the Navigator along the road is a 450-horsepower, twin-turbo V-6 engine. The engine cranks out about 500-foot-pounds of torque, so there is more than enough power for any situation.  Taking the output from this powerplant is a 10-speed automatic.  The engine/transmission combo moves the Navigator from 0 to 60 in the mid 5 second range with a top speed of 115 mph. Fuel economy is surprisingly good at 16 mpg city and 23 mpg on the highway.

Meantime, the Navigator seats seven to eight comfortably. In its standard layout – two-two-three – it seats seven quite nicely. There is still more than enough legroom, hip room, and thigh-room. The seat back provides excellent lower and middle back support. That support is key to enabling the passengers to spend hours in the same spots as you head off to a weekend getaway. Frankly, the comfortable and supportive seats mean you will find yourself quite comfortable.

Interestingly, the seat bottoms are comfortable because of a very subtle set of bolsters built into the seat-bottoms. In front of the high-backed captains-style driver and passenger spots, the operator should be able to find a comfortable position. After all, how can you not find a comfortable position in a seat adjusts 30 ways.  There other adjustable seats are available on different Navigator trim levels, but the max-adjustable 30-way seat on the Black Label gives you so many adjustment possibilities that it is hard not to find the exact one you need. In any of the trims, once you tailor the seating position, the rest is a piece of cake as the pedals, and all of the steering wheel controls are right at hand, or they are located conveniently near the wheel on the dash panel. Those controls include the headlights and the rear hatch.

The Navigator’s Ride Is Comfortably Pliant

As noted briefly, the Lincoln SUV has a comfortable, pliant ride. If the Navigator hits some lousy pavement, everyone remains comfortable because the suspension soaks up most of the jarring. When the SUV encounters off-road, back-country, trails the five-position mode switch takes on added importance. The combination of the mode switch and the ability of the long wheelbase to handle rough roads ensures that passengers are comfortable when the Navigator moves. The mode switch, which sets up the shocks for the way ahead, has five settings. They include:

Each parameter ties to electrically controlled adaptive dampers that set up the shocks for maximum comfort. Responsiveness, ride and handling all become better with the SUV’s two-speed towing package that includes an electronically limited slip differential, heavy-duty radiator, transmission oil cooler and a two-speed low gear which is also part of the trailering system. It’s quite a system and taps into Ford’s advanced pickup structure.

Lincoln restyled the Navigator last year. Though most of the design is nicely understated, there are some spots where the design team went more than a bit overboard. For example, the design teams used large amounts of chrome between the stylish design headlights. It would have been better to have used blacked-out grille work because it is far more effective. And, it does leave you wondering why on earth Lincoln employs a daylight driving light system because sun coming off the massive expanse of chrome makes it clear that a Navigator is behind you.

From the front end, the design flows up a rising hood that moves up to the A-pillar. At this pillar, the windshield is quite raked (slanted). From here, the roofline moves up and into the rounded roofline and on to the D-pillar (the rear hatch).  The rear hatch finishes things quite nicely as it ties together the roofline with the rear hatch. The rear lights are also nicely done.

One feature that we liked was the foot-operated hatch switch. If your hands are full of groceries, it is nice to have this available.

Another neat feature – something you expect on a top-of-the-line vehicle like the Navigator-L — is the rain-sensing wiper system. If you turn on the wipers on a day when it is misting heavily, the wipers then stay parked until there is enough moisture so that it makes sense for them to sweep. Until this point, the wipers remain parked where they are.  This feature has been standard on BMWs for years, and it is nice to see it on a vehicle like the Navigator-L. 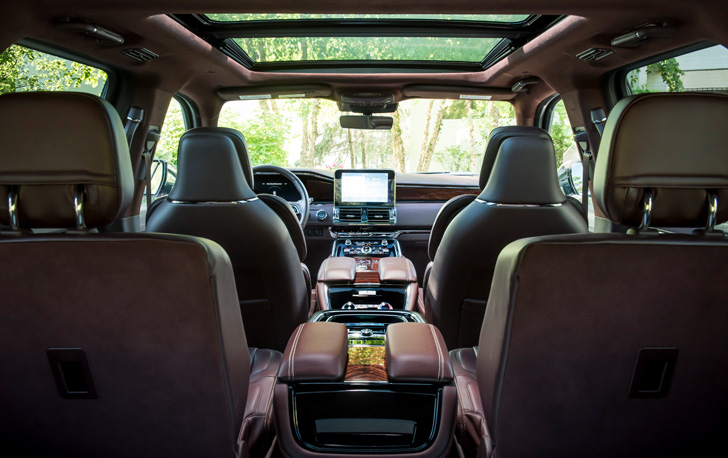 Panoramic Roof Does Have Many Uses

Another great feature is the panoramic roof. Stretching from the A-pillar to the C-pillar, the panoramic roof lets you see the sky all around while protecting you from the weather. The most practical feature we found with the general system is the built-in shade that protects you from the sun and its heat when needed. It does work well.

Some may be wondering if it is worth the price to have items like a configurable 13-inch touchscreen where your gauge pack appears. Or, whether it is worth the cost to have a 10-inch configurable touchscreen in the middle of the dash or not? The answer is yes. It is worth it because the 13-inch screen not only displays the gauges and such, but it also provides you with warnings from various safety subsystems. For instance, if you receive a notification from the blindspot monitor, the telltale appears on the 12-inch touchscreen. There is also a head-up display in front of the driver and which lets the driver watch the road ahead while, at the same time, receiving information.

We discussed the mode earlier. It is much more than a gimmick. It is an easy and essential way to implement key features quickly. As for other key features, vehicle, safety, car information is placed either on the main – 12-inch – screen, while the 10-inch screen provides infotainment inputs.

This type of technology helps to explain why the Navigator family is so expensive. Here’s the pricing:

By far, the Lincoln Navigator family stands head-and-shoulders above last year’s version. Let’s face it; Lincoln used the best features of the Ford F-150 platform such as the configurable front suspension pieces that assist control when it redesigned the Navigator. The new design is clean and except a tad too much chrome – for our tastes – up front the rest of the plan is excellent. It is true that except models like Lexus, BMW, Mercedes, Audi, Porsche, and Infiniti, the Navigator family is not inexpensive. But, there’s a lot to be said for the design and the development work that went into this SUV. Just think of this, if sales slow – as they are predicted to do – you will more than likely be able to find great deals on these vehicles.

Which is the better bargain?