The other day, while working on a review of the Porsche 911 GT3 RS, a couple of little guys came by the driveway and stared at it. After a time, the kids started running around yelling “VROOM! VROOM!” Do you want to know something? That pair of kids pretty much spelled out what the mystique of the 911 GT3 RS is: it’s about fun, performance, and hugely great engine sounds.

Indeed, the engine note from the rear-wheel-drive GT3 RS is about the best tone this side of any Ferrari or Alfa (the Giulia has a pretty good engine note for a street car). As the 911’s flat-six spools up to 8,000 rpm, the noise that comes out of the exhaust is just about right. It noisily shouts race car, driving a car, as you toy with the clutch.

The Porsche 911 GT3 RS is a true two-seat sports car that answers every fantasy any driver might have on road or track.

From the front end, the lines sweep up through the frunk (front/trunk) region to the sloping windshield. At the A-pillar, the roof picks up the line as it sweeps back toward the rounded backlight and engine hatch. Overall, the GT3 sits on a 96.6-inch wheelbase. It is 179.4 inches long; 74 inches wide and 51.1 inches high. Though you might expect a rather compact two-door like this to weigh in the 2,000-pound category, it is surprising that it weighs in at just over 3,000 pounds – 3,260, to be exact.

Sitting atop the rear is a very noticeable and functional wing that delivers more than enough downforce to keep the GT3 on any line you choose through a turn or corner. Of course, you do find you need the downforce to cope with the 500 horsepower the veteran flat-six generates and sends to the rear wheels.

Handling that power, the driver has two choices, a six-speed manual and a seven-speed dual-clutch automatic. We found the manual, for the most part, smooth as we ran through the gears. Indeed, a manual is the only way to go when it comes to a sports car like the GT3. It gives you a greater feeling of control. If we were driving to maximize fuel economy, then we probably would have chosen the seven-speed. The automatic puts you in the right gear for top fuel economy and performance. The manual, on the other hand, may not be as exacting, but it surely is a lot more fun.

Meantime, the wheel stagger is set up to deal with the generous amounts of downforce generated by the notable wing that sits atop the rear engine compartment. The rear tires are 225/30ZR-21 tires, while the fronts are 265/35ZR-20. The rear tires carry 21-inch tires, while the fronts are 20-inch rubber.  The GT3 uses Michelin race-course-capable rubber. Porsche chose Michelin Pilot Sport Cup tires, which use some of the tire manufacturer’s newest technology, for the front and rear wheels.

You might wonder how to determine if a tire is honestly race-track-capable? It is a good question, and the answer is that just by looking at the sidewall and checking the rating of the tire, it is easily visible. Let’s refer to the tires again for a moment and note that both are ZR-rated. That simple designation – ZR – tells you that the tires are not only radials, but they are also race-capable. You will find the same classification on tires used by other performance cars such as the Corvette.

We found that the electrically controlled steering response of the front tires is super quick. Indeed, it seemed that as we became more comfortable with the GT3, it was almost as if a mind-reader was controlling the steering. For example, when we were steaming along one of the two nearby Interstates and came to where we wanted to jump off, each exit was a long, off-camber falling right, by just backing off and using a little left-hand pressure on the wheel, the 911 was all set for the curve. In checking the steering inputs for this review, we had to look hard at the steering as any course corrections were so quick we almost missed them.

When we entered the local off-ramps, we found that the line was easy to determine and that the GT3 didn’t need much input to set the wheels for the exit. Indeed, the entire maneuver seemed to be finished seemingly before it began. The changes to the left-hand side were quite quick as the tires, and suspension set up very quickly. Then, as the 911 moved deeper into the curve, moving toward the foot of the exit, the suspension quickly flattened out as the right-hand wheels and suspension responded to the movement. It was quite subtle and quick. 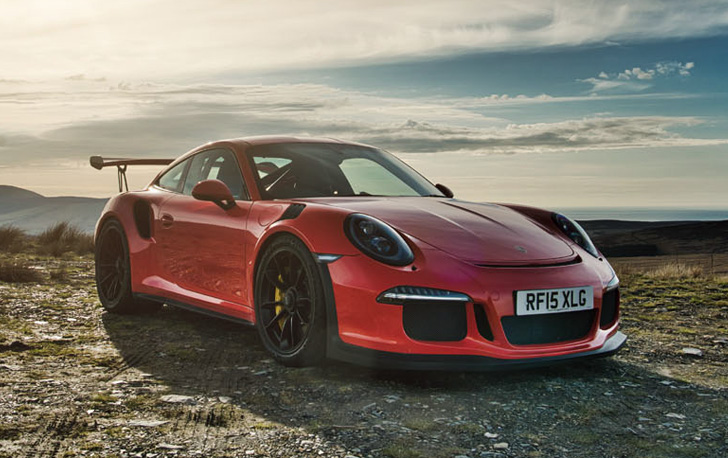 And, while we don’t have the math available to prove it, it seems as if the combined downforce, wheel and ride geometries, as well as the suspension, worked together to handle the exit correctly. As our review continued and we drove through more of the local real estate on other parts of the Interstate system, we found same quick reactions to be identical.   Whether the turn exit was off-camber, a long sweeper to the left or right, or on-camber, the response of the GT3 was the same, quite well-mannered. The same as true with distinctly on-camber turns as with other more drastic off-camber turns as well.

Another key feature was the GT3’s braking ability. As you might expect, the GT3 used a racing-style set of disc brakes. The rear brakes feature 16.1-inch cross-drilled carbon ceramic discs, while the fronts were fitted with 15.4-inch cross-drilled discs. The reason the discs are cross-drilled is for added ventilation.  The cooler discs operate, the better the stopping power they offer.  Carbon-ceramic sheds heat quicker than traditional brakes, so they are not subject to prolonged heating. Indeed, the binders hauled the GT3 from 70 mph in a fantastic 128 feet with very little fanfare (other vehicles we have reviewed have started to slew left and right or have also plowed and suddenly snapped back as we punched the brakes, not the GT3).

That the 911 kept its cool and balance during quick stops and other handling situations was thanks to the active suspension parts. Honestly known as the Porsche Active Suspension Management (PASM) unit, the system tightens things up radically for track-like performance where rigidity is needed and then equally quickly returns to normal pliant handling at the push of a console-mounted button. Frankly, if you are doing a great deal of highway driving and not much track-work, you will probably find that the GT3 remains in the standard driving mode most of the time.

One thing about the handling component is the self-steering rear end. In tight turns or corners, the rear axle senses any issues that it might be encountering, and if it runs into something where it detects that the 911 needs added steering from the rear wheels, then it is added. It does keep things nice and stable in tight turns or corners. Most of the time, you never know it is working or even needed.

And this brings us to performance. The 4.0-liter flat-six cranks out 500 horsepower (as was noted earlier) and puts out 350 pounds-feet of torque. This is pretty potent stuff, especially when you think that the RS isn’t turbocharged.  For instance, the 0 to 60 time is something like 3.0 seconds; while 0 to 100 is in the 7-second range. With a top-end of nearly 200 mph, the GT3 proves it can work the track, as well as every day driving. It depends on how you use the driveline. 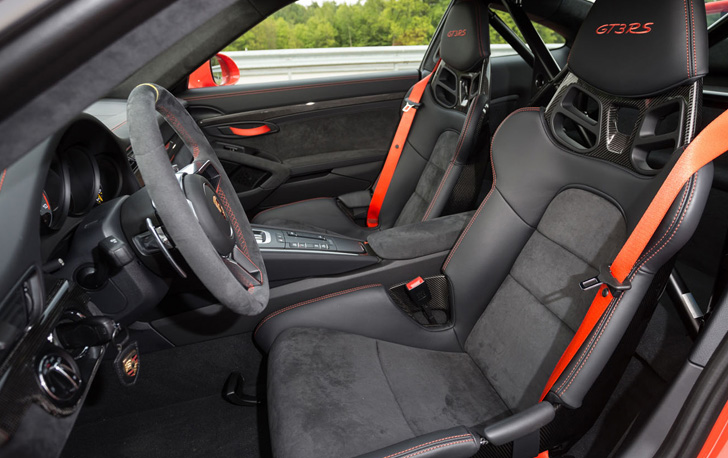 Moving to the interior, aside from standard items like Apple Play, Android Auto and the usual infotainment system, you will probably notice the seats themselves. For Porsche to improve upon the 911 into the GT3, they cut weight where they could. For example, the brakes use lightweight carbon ceramic rotors and parts; the seats are carbon fiber, and carbon fiber is used in the rear wing.

Once you have gotten into the driver’s seat you will notice that for a shell-like unit, it is comfortable. The seats have more than enough headroom, legroom, shoulder room and hip room for most non-NBA centers. It’s quite likely that if you are over about six-foot-five you will find the accommodations rather tight, although this is a guesstimate on the much-shorter author’s part.

Admittedly, in a two-seater, the quarters are rather tight, compared to other more spacious vehicles. That’s the downside. The upside is that no driver will have problems finding or viewing things either on the steering wheel – it is a racing-style wheel. The same is true with controls that are on the central console or on the configurable infotainment system displays.

While the Porsche 911 GT3 RS is a ball to drive – it is the closest we have come to a real vehicle that’s bred to run on any race track – it does have a major drawback that forces us to think of another version. The huge wing on the rear cuts down on the ability to see out the rear window. Granted, it is a functional hood that is made for the output of the 500-hp six-cylinder flathead engine. However, one can’t get around the obstacle posed by the wing.

Instead, if you were to opt for the Touring Package, you would find it has all the features of the GT3 and while it might not have the wing for the added downforce, the 911 GT3 Touring is able to hold its own, using the same engine and driveline setup. Indeed, it also has the same wheel stagger. It just lacks the signature wing, but, body and suspension stiffening make up for much of what the wing provides.

Each vehicle is a $150,000-class sports car. Whether you spend your money for the all-out winged variant or for the slightly more comfortable and practical one – is up to you.