Bigger is better, right? From houses and cell phones, to American waistlines and consumer debt, everything keeps growing. So too does our everyday vehicle choice, with the midsize crossover reaching ever larger sizes. VW’s Atlas, Subaru’s Ascent, and now the Kia Telluride all tell the tale of limited success with limited size, therefore a larger size should lead to larger success, right? Let’s find out, with a closer look at the Kia Telluride.

The Telluride and its chassis-twin Hyundai Palisade are 5-door mid-size crossovers for the 2020 model year. While an all new model, they’re both built on the existing mid-size Kia Sorento, with several additional inches of stylish bodywork. The “mid-size plus” class makes sense, as the Chevy Traverse and Ford Explorer easily sell well into six figures each year as mediocre 3-row mid-sizers. Kia may step on some Sorento sales with their new ride, but that one’s never been a class leader, and honestly the Telluride is better. While not as visually cool as the Land Rover-ish looking Telluride concept, the production model sports a blocky and chiseled design that looks like it wears a tool belt and smells of Old Spice. Unlike the Sorento that doesn’t hide its car-based crossover roots, the Telluride gets a rugged SUV body dropped on it with Kia’s most modern design language. I’m not an SUV guy, but this works. It’s a safe design, but actually rather attractive.

Power comes from a bored-out version of Hyundai/Kia’s Lambda II V6, this one displacing 3.8L and making 291 hp and 262 lb-ft. That’s straight mid-pack for power, further indicating that Kia went the safe route here. An 8-speed auto handles shifting duties. Don’t like those powertrain choices? Too bad, as this is the only Telluride engine/trans combo. Since it is an American focused ride, it’s assembled in good ol’ West Point Georgia to further muddy the debate on what is truly an American vehicle.

Car & Driver says the Telluride will run zero to sixty in 7.1 seconds, which is dead in line with your neighbor kid in the Subaru BRZ. While that’s a fair drag race, you’ll lose quite a bit of handling and steering feel, but gain massive cargo space and AWD, so many buyers will likely see that as a fair trade. Motor Trend’s quarter mile was 15.4 seconds at 93 mph, putting it mid-pack compared to Atlas and Pilot.

Trim levels are base LX, S, mid-level EX, and range topping SX.  That gets you a lot of features, including: LED headlights, 20-inch wheels, dual sunroofs, a heated steering wheel, Nappa leather upholstery, heated and ventilated second-row seats, rain-sensing wipers, a head-up display, a surround-view camera system, adaptive cruise control with steering assist, a 10.3-inch touchscreen infotainment system with Apple CarPlay and Android Auto, and six USB ports. Oh, and 8 cup holders and 4 additional bottle holders in the doors for all the thirsty people out there. All that stuff has weight, so you’re looking at 4,300 lbs which is about the same as a Dodge Journey, which is about the only way these two are comparable (seriously, don’t buy a Journey). All-wheel-drive is optional, as is self-leveling air suspension.

Driving a Telluride, one can almost see the logic of why the traditional sedan is in decline, and why crossovers are all the rage. There’s minimal sporting pretense here, but the Telluride’s suspension and steering offer a surprising sporty element, as if they bench-marked the Mazda CX-9. It soaks up most bumps just fine, but a mid-corner pothole did cause an unsettled adjustment from the electronic driving nannies. There is a good amount of body roll in corners, but it felt confident even at high speed cloverleaf highway transitions. With the quiet cabin and comfy seats, this would make an excellent road tripper. 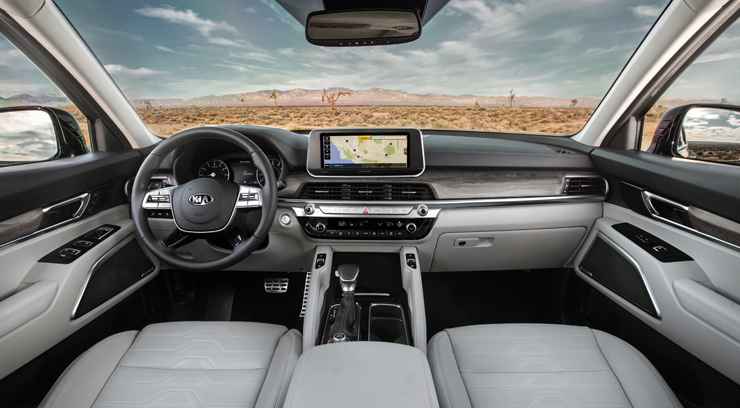 Kia’s website shows the Telluride blasting over sand dunes and fording streams at high speed. That’s akin to Carl’s Jr having Amanda Seyfried scarf burgers in their commercials. We know it’s not realistic, but we’ll watch it anyway. Tellurides are going to be used for running kids to school, getting to work and back, and taking the family out to eat. This will rarely see dirt, and that’s okay. Kia says there’s 8 inches of ground clearance, which is in line with a Subaru Outback. The AWD and clearance are more for New England winter drivers than off-roaders. Gas mileage is similarly acceptable, eking out 20 in the city, and up to 26 on the highway. Not great, but on the low side of average for this class. That’s not a bad compromise since the interior quality is on the high side and kinda makes up for it.

Exterior colors cover a wide range between slate and gray, with a similar range of interior colors, offset by a sole khaki leather. While we’ll poke manufacturers for their lack of bold colors, the safe color palette confirms the Telluride is a good looking ride inside and out. Sit in the driver’s seat and you’ll notice this looks more upscale than what you’d expect from even a brand spankin’ new Kia. The steering wheel looks borrowed from their other rides, but the rest of the dash layout impresses. The center splash of wood trim is a nice touch, as are the large center console grab handles. You’ll likely need those when rock crawling at Moab, or more realistically, picking up Jayden and Tanner from Pre-K.  The seats are above average for comfort, not XC90 level, but surprising. Visibility is solid in all directions, but the a-pillar is massively thick. The huge center screen is nicely done, it’s bright and sharp, and designed in the current “I dropped an iPad here” style. Odds are you’re probably going to pay mid/upper $30k range for this ride, and the interior is just about there. It’s quiet on-road too, with minimal road and wind noise. The HUD is sweet, but the adaptive cruise control cuts in too hard and needs more development time. It’ll probably happen via a software update by the time you read this. The overall feel is more impressive than the new Explorer, but also pricier.

Pricing is all over the place, starting at $33,000 stripped, and you can load it out well over $47,000 in SX trim. The question is, are you reading that and saying “That’s a lot of money for a Kia”? If so, you need to keep in mind that a loaded Honda Pilot or Odyssey will cost more. Sure, Honda has an excellent reputation, but Kia has advanced dramatically since the ‘90s. How much more are you willing to pay for brand prestige in a non-luxury commuter crossover?

So, what’s the bottom line on the Kia Telluride? It’s a great rig, regardless of brand name. That’s still a point of contention though, as most buyers still don’t want to pay well into $40k zone for anything with a Kia badge on the front (see Stinger sales for an example). Thirty years ago, you bought a boring Japanese car or you bought an unreliable car from anywhere else, there were no other choices.  We’re decades separated from that time, where nearly every vehicle at every price point would be rated at least “pretty good” by magazine reviewers. There are extremely few crap cans, and yet, Kia still struggles with their image of 30 years ago, and asking nearly $50k for a loaded high-end model comes off as ambitious. Still, if there’s any vehicle that can announce that Kia has arrived as a serious player, the Telluride is it.

Which top-of-the-line remote controled toy would you rather have?

Which automotive figure do you respect the most?