In the past I applied to deliver pizzas for the leading pizza restaurant chain (hint: It was founded in Wichita, KS); but I must admit that I have never actually worked as a pizza delivery driver.  Despite this I still believe that I recognize some of the central needs pizza delivery people look for in a vehicle (or would like to have). Unfortunately the ultimate cars to deliver pizzas with are also going to be the ones that most with this job are not going to be able to afford, such as the 2014 Mercedes-Benz E250 BlueTec Diesel.  Assuming that pizza deliverers don’t typically have $55,000 laying around for a car such as this, our list was limited to vehicles that can be purchased for less than $10,000 (used) and with under 100k miles.  The top 10 pizza car list below considers automobiles that are fairly 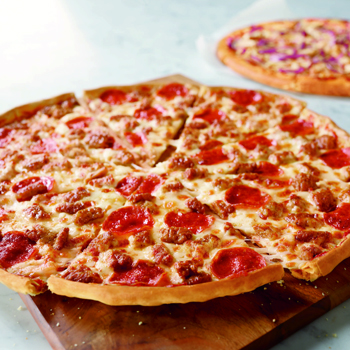 reliable so that you don’t break down in the wrong spot at the wrong time.  It also considers vehicles with decent fuel economy since pizza delivery drivers typically quickly pile on the miles and obviously the lower the MPG of their car, the less cash they stand to net.  This list of the best pizza delivery driver cars also considers vehicles that handle well in inclement weather, since (from personal experience) people tend to use the pizza delivery option even more so when the weather is poor.

Pizza delivery is different for every worker, but mainly based on where you deliver.  If you deliver pizza pies to ghetto areas such as south central Los Angeles or certain neighborhoods in south Chicago, then you may wish that you were driving a Lenco Bearcat G3 which offers .50 caliber armor protection among other goodies.  Since that’s not an option, this list at least includes cars that have respectable acceleration in which to afford drivers the time to get out of the area quickly. Other parts of the nation such as Cleavland’s lake effect snow would prompt delivery drivers in this area to prioritize their cars based on handling in bad weather and would likely prioritize all wheel drive and full 4×4 vehicles.  Finally, other considerations were made such as the interior roominess to accommodate large pizza orders and convenience features such as heated seats and navigation systems.

2009 Smart Fortwo     What this car lacks in pizza storage it makes up for in maneuverability and is ideal for big cities where parking is limited at best. Use this little guy to pull straight into a parking gap.

2002 Audi S6 Avant Quattro     This car pretty much has it all.  Audi’s are made for individuals that like to drive and particularly the S Line, which offers impressive acceleration and handling.  This is one wagon that can blow the pants off many sports cars of its day.  The Audi also features loads of leather and pretty much heated everything.  The 4.2L V8 will get you there fast, while the wagon maximizes pizza storage.  The only downsides to this choice are the MPG and potential repair costs.

2010 Wheego Whip NEV 96 Volt     If you like the size of the Smart car, but the mpg is just too much then the Wheego Whip electric car is the way to go.  Perhaps it isn’t the most exciting car to look at or drive, but you sure will enjoy the money that you save driving this thing and dealing with tight parking situations.

2007 Toyota Corolla     What this car lacks in features such as navigation and AWD, it makes up for in savings.  You stand to save a lot of dough (pun intended) with this choice as it one of the most reliable cars of the past couple decades, offers great MPG and a fairly low mile examples can be acquired for way under the $10K mark.

2012 Toyota Yaris     While this car is no giant, its exterior looks deceptively small compared to the roominess of the interior…plenty of room for pizzas back there.  Even though the Yaris doesn’t have standard features like heated seats and navigation, it offers some excellent fuel economy and good turning radius for tight delivery situations.

2000 BMW 323Ci     BMW’s are generally reliable and this 3-series generation is no exception.  This car offers tons of nice bells and whistles for the buck, which will make your pizza delivers that much easier.  It’s not the quickest BMW ever made, but it boasts great handling and MPG (for its class).  Few Bimmer owners experience post purchase regret and you probably won’t be an exception.

2004 Jeep Grand Cherokee Laredo     If you regularly deliver pizzas in rain, snow or ice, down bumpy non-paved roads, on steep inclines or declines, then this vehicle might be the right fit for you.  Yes the gas mileage is comparatively poor, but its 4×4 capability is excellent and it comes with some nice goodies such as heated leather seats, heated mirrors and a powerful sound system to keep your deliveries fun.

2002 Toyota Prius     If gas mileage is your main concern, and if you want a longer mile range than the full electric car, then a hybrid car is the way to go.  More recent hybrids are going to break the $10K budget (even used with tons of miles) so you’re probably going to have to reach back to an early Prius.  Although these are not necessarily an overly exciting car to drive, it offers amazing MPG and can even come with a navigation system.

2001 Cadillac DeVille Limousine     You’re probably thinking that a limo is a horrible choice for this delivery job, but if you can overlook the poor maneuverability and MPG, then this beast may offer more than you think.  First of all a limousine has the pizza capacity of two minivans so when the big orders roll in you’re the obvious delivery choice.  Secondly, after your shift ends, simply throw on a sport coat, swap out your hat for a chauffeur cap and voila, you’re already at your second job and the best part is you can be your own boss.

2001 Volvo C70 Convertible     If you’re a pizza delivery person in a sunny all the time area like Southern California or South Florida, then a convertible is the only way to go.  Sure you may not always want the top down, but at least you have the option to enjoy the beautiful weather to make your deliveries a bit more enjoyable.  The C70 is a solid car.  It’s reliable, comfortable, safe and pretty quick with its turbo charged engine.  These can be had for way under $10k.

Which would you rather be gifted?

Six year old Porsche 911 Turbo with low miles
Around the world 1st class airfare and hotel accommodations for a month?