Before the third-generation Bentley Flying Spur, we were presented with models that heavily relied on their VW DNA, hidden well beneath their luxury shells. Admittedly, it was VW Phaeton DNA, yet in the world of uber-exquisite, extremely picky buyers, this may have been an undesired fact. Nevertheless, this is no longer an issue. The 2021 Bentley Flying Spur is now sharing its platform with Porsche Panamera.

Furthermore, the platform switch isn’t all about the brand. In fact, the newer underpinnings make the 2021 Bentley Flying Spur the best one, and probably the best sedan Bentley has built in recent times.

The third gen Flying Spur is strikingly beautiful.  Its exterior aesthetics balance a look of graceful elegance and imposing performance.  Compared to the previous iteration, front wheels have been pulled forward allowing the windshield to slope at a less abrupt angle.  From the side, all proportions look just right, and the chassis seems to be sitting comfortably on its stately 21” wheels.

Visually the weakest link on the Bentley’s design is its exaggerated grille. As with modern BMW’s, bigger is not necessarily better.  Although, the brilliance of the rest of its design, make this less than attractive grille nearly indiscernible when the car is taken in as a whole.

By the looks of it, Bentley wants to shift the target of the Flying Spur sedan from the driven to the driver.  In other words, previous versions of the car were in a way heavy both in terms of looks and handling, making it more comfortable to sit in the back rather than at the wheel.

While the center section of the car is borrowed from the long-wheelbase Porsche Panamera Executive, Bentley provided a unique design for the rear end. This allowed the 2021 Flying Spur to provide a suspension setup that benefits comfort while also bringing plenty of trunk space. This might not be the ideal car for a cross country family road trip, but it’s still good to know there’s room for some luggage (golf clubs and Hermès Birkin bags).  Need more, get the Bentayga.

Aside from vehicles boasting a Rolls-Royce badge, Bentley delivers unmatched quality, luxury and comfort.  Bentley allows the buyer to choose how the interior will look and feel.  Bentley users can even customize the dashboard to fit their mood or needs.  Press a button to reveal three regal gauges harkening back to Bentley’s of old, press it again to reveal a 12.3-inch high-definition touchscreen or press it again to simply show a smooth wood dash for an oasis of tranquility.

As this is a legitimate executive vehicle, let’s start from the back. Rear seats provide plenty of legroom and several toys to fiddle with while you’re in route to negotiate a multi-million dollar deal. The 2020 Bentley Flying Spur comes standard with 14-way electric adjustable seats with integrated heating and cooling, massage options and a removable touchscreen. Optionally, buyers can add ambient mood lighting, a fridge and complex sounds systems designed by either Bang&Olufsen or Naim ($8,990).

Buyers can further opt for either classic door ornaments or the first-ever 3D quilting. This unique quilting effect will likely appeal to many buyers with a range of style preferences as it speaks a modern design language without stripping it of its traditional luxurious feeling. 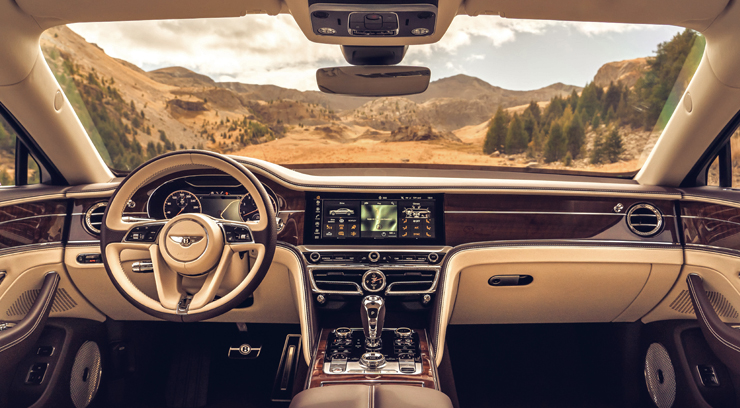 Up front, the influence of the Bentley Continental GT is heavily felt. Probably the main difference consists of the bullseye center vents being replaced by more modern iterations. There are also plenty of features, buttons and settings to explore. Thankfully, regardless of what you’d like to adjust, controls are extremely intuitive and make it easier for drivers to fix their privileged eyes on the road.

Bentley integrates quality woods, leathers and metal bits so beautifully that you won’t even notice some of the Volkswagen sourced parts. Overall, the interior environment of the 2021 Bentley Flying Spur doesn’t stand out due to its impressive technology. You could get the same gadgets on an executive BMW for a several thousand dollars less.  However, you wouldn’t find the same amount of class and style in a BMW.

Performance – Plenty of it

We generally don’t see executive cars pushed to the limit when driving, unless they’re part of some braggadocios music video.  However, in the case of the 2021 Flying Spur, performance is there if you want it. And the best part?  No comfort is sacrificed when the go pedal is to the floor.

The Flying Spur inspires absolute confidence as it glides over the road.  It shares the Continental GT’s potent 6-liter twin-turbo W12 engine and adds just 10hp over the original power unit, now rated at 626hp and 663 lb.-ft. of torque.  With the axles now roughly 130mm further from each other, there’s a 48-volt electric system that manages the four-wheel steering and the active torsion bar.  As you’d expect, there is more rear bias on the AWD system, which delivers power to the wheels via a silky smooth shifting twin-clutch 8-speed automatic gearbox.

Although statistically, efficiency is up by 19% compared to the old Flying Spur, 19.1 mph combined and 337g/km of CO2 emissions aren’t really benchmarks for Bentley to promote.

Since previous generations of the Flying Spur had their engine mounted ahead of the front axle, their heavy nose would make the tires squeal when negotiating sharper turns.  Fortunately, the new generation is not only lighter overall but also the longer wheelbase allows for a 54/46 weight distribution from the original 56/44.

Still, configuring the 6-liter W12 to fit alongside the AWD system within the MSB platform required several engineering gimmicks.  For one, the front axle goes directly through the oil sump.

The 2021 Bentley Flying Spur feels more agile around the bends. While this big luxury sedan tackles corners more graciously than its predecessors, it is no substitute for today’s supercars.  The best part?  It’s all happening without sacrificing even a bit of comfort.

Just like the Flying Spurs of the 50s, the latest generation is made for fast open roads. It takes just over 3 and a half seconds to reach 60 mph and hits 100 in merely 4.5 seconds.  This luxury sedan is capable of reaching 207 mph, an impressive feat considering its large stature.  With this top speed record, the Flying Spur stakes its claim as the fastest production 4-door in the world (for now), and even beats the 680hp Porsche Panamera Turbo S E-Hybrid.

When you need to stop, the giant 16.5-inch front rotors and equally impressive 15-inch rear discs will rapidly decelerate the car with a force that feels like an aircraft carrier’s arresting gear.

Like the Rolls-Royce Phantom, the Bentley Flying Spur’s rear seat is the place to be.  However, unlike the Phantom, you will best enjoy the Flying Spur from the driver’s seat. Not because the rear seat is insufficient, but because it drives so well, so engaging and practically begs you to push it harder.  This aligns perfectly with the British brand’s philosophy, of creating luxury vehicles for those who like to drive and not be driven.

The 2021 Bentley Flying Spur boasts a combination of sport sedan performance and over-the-top luxury that might even cause Rolls-Royce fans to question their loyalties. The Flying Spur starts at $216,700, and with this six-figure price, it’s fair to say it’s a bargain – for a Bentley.

Which would you rather have?