A Look at the Porsche 911 50th Anniversary Edition

Very early on, the Porsche 911 seemed to be a contradiction. The winning formula was modern performance and timeless design. The original 911 was a car that commanded respect for the numbers it could put down, and its reputation as a driver’s car. Later designs recalled the first 1963 911 with varying degrees of success, but all have been attractive in their own way.

The current 911, introduced in 2012, is an evolutionary design of the iconic shape, and possibly the best looking 911 ever. Some retro designs just plain don’t work, but this one isn’t really retro, but more like continual refinement of what started way back with the 356. While it is bigger than the previous generation, looks-wise, the 911 design has finally matured. Like the awkwardness of teenage years, the ‘90s weren’t great for the 911, but the modern car looks like a supermodel that’s been hitting the gym. Sleek, with perfect curves, and arguably the best tail lights on any production car, even the base 911 will turn heads. Only a couple of tasteful chrome bits on this model initially highlight that this isn’t your average 911.

For the 50th anniversary of the 911, Porsche did a lot more than a special color of red and some badging (a dig at Corvette there), and gave the 911 a proper golden anniversary. For starters, Porsche went with the wider all-wheel drive 911 Carrera 4’s body. Following the GTS, it has been dropped 10 mm for a perfect stance. Drivetrain is still rear-wheel drive of course, but with the Carrera S’s power plant. The 20” wheels are a Fuchs-like design, harkening to the 911 of the ‘60s and ‘70s. While it sounds like a Frankenstein, this is a Porsche, so all the pretty bits add up to something better than expected. While the tired old cliché “less is more” certainly applies to the exterior, it’s really more of an example where two plus two equals nineteen.
The end product of cherry-picking the Porsche parts bin results in an impressive car. The 3.8 liter boxer is naturally aspirated, but produce a quite satisfactory 400 horsepower and 325 lb-ft. With the optional Powerkit, the six banger generates a remarkable 430 horsepower. With optional PDK dual clutch transmission, the 911 50th accelerates from 0 to 60 mph in 3.8 seconds, and tops out at 188 mph. If you want to row your own gears, the 7-speed manual will cost you some time, as a 0 to 60 sprint runs 4.2 seconds. 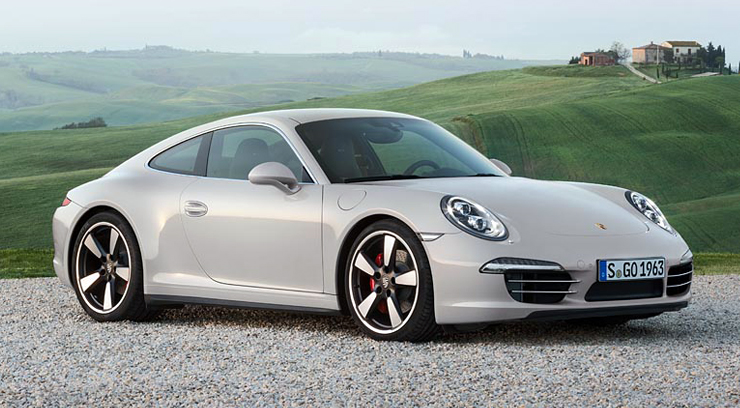 The interior is just as fine as the exterior, and doesn’t stray far from the German’s fanatical attention to detail. The cabin is impeccable, with high fit and finish and brilliant ergonomics. On the 50th, the leather surfaces are of a higher grade, and there is a bit more brushed aluminum trim. Seats are best in class for comfort, and only available in cloth with leather bolsters. Probably the best touch is the instrument cluster. No sleek touchscreen here, as the 911 sports retro-inspired gauges that will make you want to go out and earn some traffic tickets.

Interesting options include the Sport Chrono Package, which allows multiple suspension settings. Select “Sport Plus” mode for firmer dampening and even more direct steering feedback. The PDK will shift quicker in this mode, and the electronic safety devices will only step in when you get in over your head. Launch control is said to be a track feature, but really it’s about embarrassing the other guy at the stoplight. Sport Chrono Package had a high take rate, but no solid numbers. If you are looking at a 50th anniversary model, you might want to hold out for one with this package.

While you can’t buy them new anymore, if you really look, you should be able to find a 50th anniversary 911 on the used market. While original MSRP was around $125k, they went for higher. Depreciation hasn’t really hit the 50 yet, so expect to pay Mercedes AMG GT money for this 911. While that is a good chunk of bitcoin, and you could get a loaded Audi R8, Dodge Viper, or Jaguar F-TYPE R for the same price. However, nothing else in the price range has the sheer grace of the 911. It’s a formula that Porsche has been working on a long time, and it shows.

How do you wash your car?