Is the Ford F-150 Lightning a Proper Electric Alternative?

The electric pickup market is on fire. In the ever-increasing push towards sustainable mobility, big automakers are rolling out electric utility vehicles.

Ford is stepping into this new market with the likes of the Rivian RT1, which has taken the world by surprise.  Ford’s attempt at an electric pickup comes as an extension of its bestselling F-150 line, along with the resurrected “Lightning” nameplate. With some increased competition in what’s still a new and fast-growing market segment, F-150 is expected to outperform its rivals.

The Ford F-150 lightning is, at its core, the classic F-150 pickup, slapped with an electric powertrain. It comes with the straight body lines and masculine boxy features, just like the competition. Wheel arches are elevated and there are no-nonsense ornaments sticking out. Is this a bad thing? Not necessarily. In fact, Ford might have taken the smartest decision when it comes to design.

Here’s why. Thanks to this rather conservative design approach, the F-150 feels more familiar to the public, and, more importantly, comes with a lower price tag.

Starting at the front, Ford integrated a long light bar, filling the space between the highlights. This extended light bar feature seems to be a trendy design cue on EV utility vehicles, such as on the Rivian RT1. While the light bar is always on while driving, it is dim enough not to meet the Daytime Running Light (DRL) requirement. For this, Ford included an additional set of DRLs in the vertically placed headlights.

Like with other electric pickups, the lack of an internal combustion engine affords for more space under the skin. Beneath the hood of the F-150 lightning Ford created a rather generous “frunk” space. Press the corresponding key on the fob and the electric frunk lid will open up.

Inside the frunk, there is 14 cubic feet of space, enough to store a month’s worth of bee…I mean soda in there. Lack of a trunk has been an issue for some prospective buyers of traditional  pickups. Electric pickups are solving this issue. The frunk can hold two full golf bags. A lid covers a  discrete storage space beneath the main cargo hold; just perfect to store your pickup’s charging cable.

There’s more! The front trunk of the F-150 Lightning does more than just store stuff. Pulling the cover on the right side of the trunk unveils a set of outlets and USB-C ports. Ford states the power outlets are usable both when stationary and when driving. Charging capacity will be limited when driving to benefit the drivetrain.

Unlocking the doors of the F-150 lightning happens either via the proximity key fob, or by entering a code on the illuminated keypad integrated in the driver’s side B pillar. Entering the code and then holding the 5-key will also open the front trunk.

Speaking of lighting, the Ford F-150 Lighting comes with a cool feature called Zone Lightning, where a series of white lights attached around the truck aid in low visibility zones. For example, if you’re going camping and found yourself reaching your destination at night with no daylight, the Zone Lighting will turn on the white lights around the truck to let you search for a proper tent-setting place.

The bed is pretty much the same as on the regular F-150, and Ford says this was intentional by design. The size and shape of the truck bed was kept the same so those upgrading from the combustion version to the new electric F-150 can still use their truck bed accessories like space splitters. Furthermore, another set of standard power outlets will be found near the tailgate, ready to provide current to any power tools you might use in your daily activity.

The cabin resembles the combustion sibling

Switching to the inside of the F-150 Lightning, we find out the cabin is pretty much the same as the gas-powered F-150, minus the large infotainment display.

The screen shadowing the center console is a sizable 12-inch touchscreen featuring Ford’s latest Sync 4 software. On the higher trims, the screen is replaced by an even bigger 15-inch display. Both versions come standard with Apple CarPlay, Android Auto and Wi-Fi Hotspot. In terms of in-car entertainment, Ford is fully boasting its B&O partnership by providing not one, but two optional premium sound systems, with 8 speakers in the Lariat trim and a whooping 18 speakers on the top-end Platinum Trim. 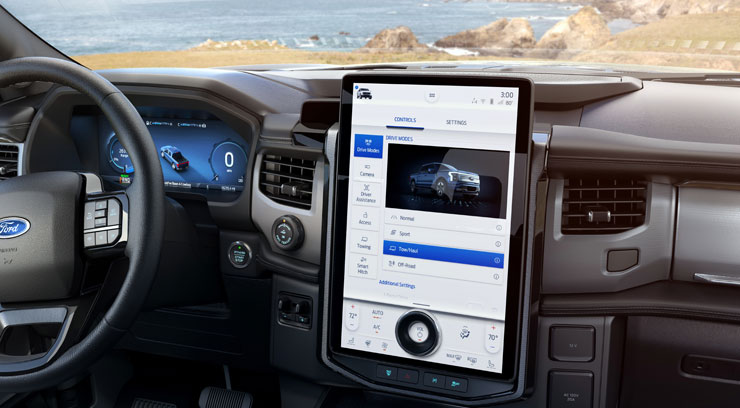 One quirky feature of the electric F-150 is the ability to fold the gear level by the press of a button. Once down, you can fold back the center console storage lid and use it as a flat surface to either write stuff or any other quick actions.

It’s worth mentioning that the only configuration you can get the F-150 Lightning in is the crew cab and short bed combination. Ford isn’t currently planning to offer a long-bed option with single-cab, but it may become available in the future.

In terms of legroom and headroom, the F-150 Lightning is just as spacious as its combustion counterpart. One might expect that the floor-mounted battery pack might eat up some space from the cabin, but clever engineering from Ford has ensured that all occupants benefit from the same spatial comfort as combustion F-150 SuperCrew users.

To get things moving, Ford installed a 426hp, 775lb-ft of torque dual-motor electric setup in the F-150 Lightning. Power figures become even more impressive once you realize that the most powerful combustion F-150 (sans the Raptor) is the turbocharged V6 hybrid capable of 430hp and 570lb-ft.

According to Ford, the standard battery pack is good for up to 230 miles from a full charge. While the range is decent for an EV, it will still induce range anxiety in some potential buyers, especially if they plan to tow. For those who find the standard battery insufficient, Ford offers an extended-range battery that pushes the range to 300 miles and boosts power output to 563hp.

In terms of performance, an F-150 Lightning with an extended battery will accelerate from 0 to 60 mph somewhere in the mid 4-second range.  Brisk for any pickup and even quicker than its Raptor combustion counterpart.

The extended battery pack will also come with a robust home charging station, free of charge. While you’ll have to pay for installation, receiving a free charging port is a great perk for EV owners. For on-the-road fast charging, the F-150 Lightning supports 150kW fast charging that can go from 15% battery charge to 80% in roughly 40 minutes.

The 2022 F-150 lightning offers one feature not seen on any other electric pickup. In case of emergency, you can use the truck’s battery to power up your home, with a constant flow of 9.6kWh. A fully charged battery could power a regular sized home for up to three days or even more, depending on how you rationalize power consumption.

Since pickup trucks are often used for towing and hauling heavy loads, this could significantly impact the range provided by the battery. The standard range battery comes with a maximum payload of 2000lbs. While we are yet to find out how much the F-150 can tow with the extended battery pack, Ford mentioned that the optional Max Trailer Tow package makes the F-150 Lightning good for 10,000lbs of towing capacity. 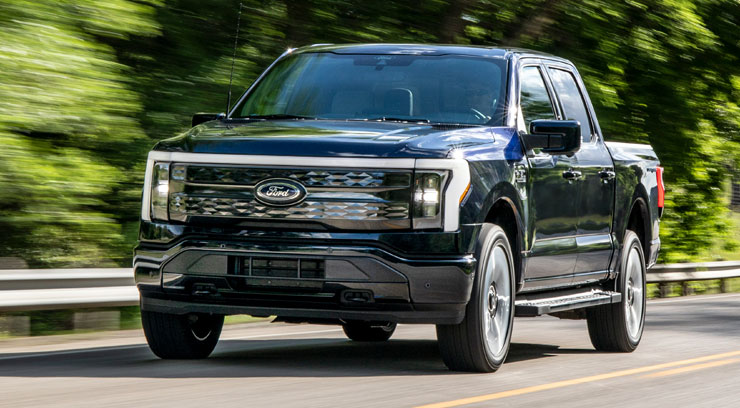 Whether sitting in the driver’s seat or in one of the passengers’ seats, the ride feels comfortable and refined. It’s smooth, but with the oomph of a quick acceleration burst whenever you want to press the fun pedal.  Pressing it to the floor will press you back in your seat, although it dwindles as the pickup reaches the 105mph top speed mark.

Even though it is shaped more or less like a brick, the F-150 Lightning still happens to be Ford’s most aerodynamic F-150 yet. Even at highway speeds, the cabin remains surprisingly quiet, with barely any noticeable wind and tire noise.

Given the low-center of gravity generated by the floor-mounted battery pack, the F-150 Lightning is more stable and provides better handling than its combustion siblings. Even on 25% grade inclines, the pickup won’t break a sweat towing 3 tons – there aren’t many gas or diesel trucks that would come close to this performance.

Ford wanted to make the F-150 the workman’s truck, and as such, even the drive modes are pragmatic: Normal, Sport, Off-Road and Tow/Haul. With enhanced cooling systems, the F-150 can work through hot summer days without complaining or suffering from heat-related problems on the drivetrain.

Disconnecting the trailer and heading for the dirt trail will reveal the unexpected off-roading performance of this electric truck. With permanent 4-wheel drive and a simulated rear locking differential, the Lightning finds grip everywhere. For those worried about scraping the bottom on a jagged boulder, worry not.  This EV truck has carefully shielded its battery bank with sturdy steel skid plates and can take a smack like a champ like Chris Rock did from Will Smith.

The Off-Road mode adjusts the accelerator mapping, power delivery and ABS systems to better suit the rough terrain. However, the real star of the show is the F-150s independent rear suspension setup, keeping the truck planted even in the roughest conditions.

Like a thunderbolt striking the ground, the 2022 Ford F-150 Lightning aims to create chaos among an automotive industry running towards electrification. With a 44-year record of being the best-selling truck, the combustion F-150 left some really large shoes to fill. However, its electric sibling ticks all the right boxes and offers a proper electric alternative for what has become the workman’s truck of choice.

Which Car Accessory is the Stupidest?

Do you think carpool lanes are effective?